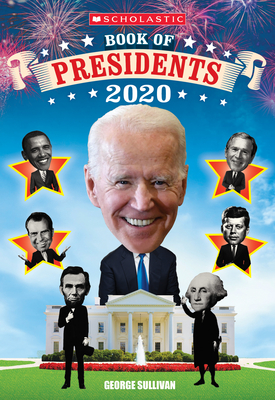 
Email or call for price.
Meet America's presidents in this trivia-packed compendium, including 2020's chosen commander-in-chief!

Refresh your knowledge of the leaders who took our nation's highest office with this easy-to-read, fact-filled book of mini biographies on everyone from George Washington to Donald Trump, and catch up on all the biggest news from the 2020 election season. The Scholastic Book of Presidents will tell you:

- Which president spoke the most languages?

- Who was the last president to keep a full beard?

- Which president has served in office the longest?

Alongside photographs and lists of key events, this book covers everything you need to know about each president's major accomplishments in and out of the Oval Office. A must-read for history buffs, educators, and anyone with a budding interest in politics, past or present.

George Edward Sullivan was born on August 11, 1927, in Lowell, Massachusetts. Between 1945 and 1948, he was in the US Navy, where he served as a journalist. He has written over 200 nonfiction books for children and young adults on a wide variety of topics. In 2005, his book Built To Last was honored with the Orbis Pictus Award for Outstanding Nonfiction for Children. Sullivan is a member of PEN, Authors Guild, Authors League of America, and the American Society of Journalists and Authors. He lives in New York with his wife.