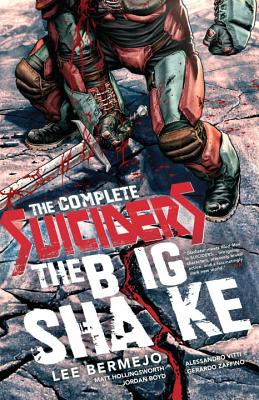 L.A. was once the City of Angels, but that was before the Great Quake came and shattered everything about her that was civilized. In the aftermath, two new cities grew up from the rubble—one of gleaming towers and untold luxury for the haves, and one of barbed wire and grinding misery for the have-nots.

Ringed by high walls and merciless guards, New Angeles is now an island of wealth in a sea of poverty. Outside its borders, a new generation of Angelenos fights for scraps in the rubble while trying desperately to find a way through the fences. Inside, the privileged few have refined their brutality and fused it with old Hollywood’s greatest invention: celebrity culture.

Broadcast in ultra-high definition, biomechanically enhanced gladiators known as Suiciders battle to the death in high-tech arenas. Their duels are a visceral reminder to the world of the power wielded by New Angeles’ corporate masters.

For rich and poor alike, the Suiciders are legends. But like the city they inhabit, their glory is built on a graveyard—and as those bodies rot, the foundations they carry threaten to crack and splinter back into chaos.

Lee Bermejo began drawing comics in 1997 for WildStorm Studios in San Diego at age 19. He collaborated with acclaimed writer Brian Azzarello on the graphic novels JOKER and LUTHOR, and worked with writer John Arcudi on the Superman feature in WEDNESDAY COMICS. He has also worked on HELLBLAZER with writer Mike Carey and GLOBAL FREQUENCY with writer Warren Ellis. Bermejo has illustrated the covers to the line of Vertigo Crime graphic novels, beginning with FILTHY RICH, written by Brian Azzarello, and DARK ENTRIES, written by Ian Rankin. Bermejo has lived in Italy since 2003.