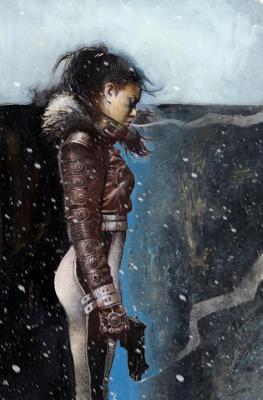 In the arctic wilderness of post-apocalyptic America, death comes in many forms—but none is worse than the terrifying plague that freezes its victims from the inside out. They call it frostbite, and it is slowly, inexorably infecting the struggling remnants of humanity. Frostbite has no vaccine, no immunity, and no cure.

In snowbound Mexico City, Dr. Henry Bonham and his daughter, Victoria, have found the key to destroying the disease. In order to make their theoretical cure a reality, however, they have to travel 2,000 treacherous miles to a secret government installation on Alcatraz Island.

Enter Keaton, captain of the cross-country cargo hauler Icebreaker, and her hard-bitten mercenary crew. They’ve spent years learning how to survive on the ice, but they’ve never before gone on a run with such high stakes—or with such determined enemies.

Will these unlikely saviors make it across the frozen wasteland, defeat the relentless forces gunning for their lives, and bring warmth to the world? Or will frostbite continue to consume all life in its icy jaws?

Joshua Williamson lives in Portland, Oregon. His career as a comics writer kicked off the ground in 2007, and since then he has done a number of books for Shadowline, Image, Desperado Publishing, Kick Start and DC Comics. He has written the Uncharted limited series, based on the popular best-selling video game series, Voodoo, and Marvel's Illuminati and Red Skull. He is currently writing THE FLASH for DC Comics.