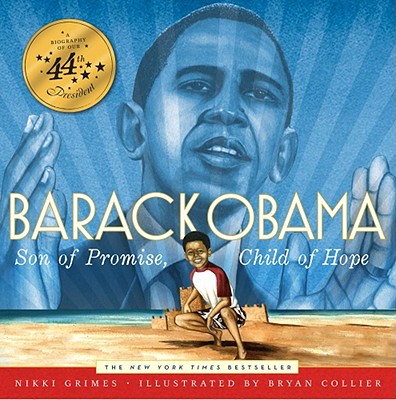 Barack Obama is the story of an exceptional man, as told by Nikki Grimes and illustrated by Bryan Collier, winners of the Coretta Scott King Award.

Ever since Barack Obama was young, Hope has lived inside him. From the beaches of Hawaii to the streets of Chicago, from the jungles of Indonesia to the plains of Kenya, he has held on to Hope. Even as a boy, Barack knew he wasn't quite like anybody else, but through his journeys he found the ability to listen to Hope and become what he was meant to be: a bridge to bring people together.

This is the moving story of an exceptional man, as told by Nikki Grimes and illustrated by Bryan Collier, both winners of the Coretta Scott King Award. Barack Obama has motivated Americans to believe with him, to believe that every one of us has the power to change ourselves and change our world.

Nikki Grimes is the recipient of the 2006 NCTE Award for Excellence in Poetry for Children. Her distinguished works include the ALA Notable book What Is Goodbye?, as well as the novels Jazmin’s Notebook, Dark Sons, and The Road to Paris, all of them Coretta Scott King Author Honor Books. She won the Coretta Scott King Author Award for Bronx Masquerade. Ms. Grimes lives in Corona, California. Visit Nikki at NikkiGrimes.com.

Bryan Collier is a beloved illustrator known for his unique style combining watercolor and detailed collage. He is a four-time Caldecott Honor recipient for Trombone Shorty, Dave the Potter, Martin’s Big Words, and Rosa. His books have won many other awards as well, including six Coretta Scott King Illustrator Awards. His recent books include By and By, Thurgood, The Five O’Clock Band, and Between the Lines. He lives in New York with his family.