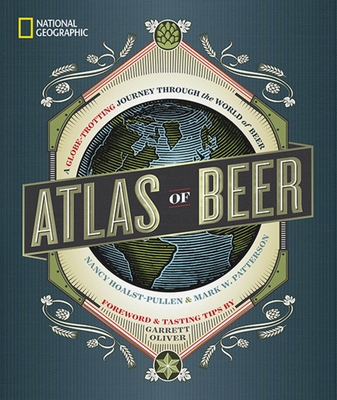 GARRETT OLIVER is one of the world's foremost authorities on the subject of beer. Oliver is the brewmaster of Brooklyn Brewery, editor-in-chief of The Oxford Companion to Beer, author of The Brewmaster's Table, and winner of the 2014 James Beard Award for Excellent Wine, Beer or Spirits Professional. He has judged beer competitions from the Great American Beer Fest to the Great British Beer Festival. In the years since joining the Brooklyn Brewery, Oliver has continued to be a tireless advocate for bringing together great beer and good food, touring the world to introduce countless people to the tastes he loves. He has hosted more than 900 beer tastings, dinners, and cooking demonstrations in 16 countries, and writes regularly for beer and food-related publications.

NANCY HOALST-PULLEN, Ph.D., is a world traveler, professor, and beer writer. Nancy has interviewed hundreds of people and imbibed thousands of beers to (re)discover the stories surrounding the geographies of beer. As a National Geographic Explorer, she has visited hundreds of locales across six continents - from historic breweries of Belgium to backyard home-brews in South Africa - to understand how beer and brewing have evolved over time and place. Nancy has published various articles on beer, with particular emphasis on the role of sustainability in the beer industry, as well as co-edited the book The Geography of Beer - Regions, Environment, and Societies with co-author Mark Patterson.

MARK PATTERSON, Ph.D., is a geography professor at Kennesaw State University. By day, Mark is a researcher with Nancy Hoalst Pullen and examines sustainability trends in the beer industry. By night, Mark is an avid home-brewer, strategically planning his next research trip to breweries around the world. As a National Geographic Explorer, he has traveled nearly 200,000 miles (and counting) on his quest to identify the nuances of the beer industry and of course, to sample the flavors of this time-honored craft. When he is not traveling the globe, Patterson can be found playing ice hockey or working on a script for a pilot series on the US craft beer industry.

“Also on tap are lessons in beer history, trends, insider knowledge from brewers and bar owners, and anecdotes about the process of making, tasting and appreciating beer in each of the countries that are covered. Cheers!” –Newsday

“…explores the diverse beer cultures, styles and histories every hophead should know about. It’s full of maps highlighting the breweries you’ll find from Canada to Cambodia, tasting notes from Brooklyn Brewery’s Garret Oliver and enough fun facts to drop while drinking at your preferred beer bar for at least a year…While a fun coffee table book, it's also quite useful. The book provides translations of beer orders in various languages so when you’re imbibing around the world you won’t have to struggle with the bartender and can get right to what’s most important—that beer.” –Food & Wine

"Both Ph.D. geography professors at Kennesaw State University, Hoalst-Pullen and Patterson are self-proclaimed “beer doctors” and avid homebrewers, who logged some 160,000 miles and traveled to six continents and 28 countries to research how beer and geography interact." -Atlanta Journal Constitution

“This book is as much an interesting travel guide as it is one on beer…This regional breakdown would be a nice guide for any beer-quaffing travelers.” –Cleveland.com

“This book would be a fine gift just by itself – or even better with a selection of the beers from the countries featured inside.” –Dayton City Paper

“Beer lovers unite in this truly unique volume that celebrates the vibrant and exciting culture of beer drinkers around the world…a seemingly endless parade of facts and anecdotes that dive deep into the process of making, tasting, and appreciating beer.” –Politics & Prose Newsletter

“…a worldwide voyage into beer…Tidbits include a history lesson on the double IPA and the realization that wherever you are, beer is best paired with friends.” –St. Thomas Times Journal

“Each geographical entry has a Beer Guide which points you to the best places to sample the suds of your dreams in each area.” –HeraldNet

“The “Atlas of Beer” is a beautiful hard-bound coffee-table book, loaded with maps, informative infographics and the stunning photography for which National Geographic is known.”
–Minneapolis Star Tribune

“…a comprehensive look at brewing and beer appreciation throughout the world’s cultures.”
–Porchdrinking.com

"Through this coffee-table tome, a pair of professional geographers travel the globe pulling together the various threads that connect place to history to culture to food and to drink." –Forbes

“…guide to not look like a complete outsider the next time you step in a pub halfway around the world.” –Men’s Fitness

“National Geographic is behind this comprehensive, insightful guide to craft beer worldwide.”
–The Winchester Star

“So far, the quest has taken Patterson…to five continents and 30 countries to try about 2,000 varieties of beer.” –KTW (Kamloops This Week)

“This new Atlas of Beer book has me daydreaming all day while my list of places to go just keeps getting longer and longer.” –@intagram: Bigwrldsmallgrl

“Down to the core, the Atlas of Beer is the epitome of an educational deep dive. It literally walks you around the world and explores almost every style known to mankind.”
–Instagram: @averagebeerdude

“We are obsessed with this book. It’s full of useful tips such as how to order a beer in the native language of the country and it’s full of the culture and history behind the beers and the regions where they’re located.” –Instagram: @beardandbroad

“Calling all beer geeks and travelers: you need to get the Atlas of Beer by National Geographic. This book contains beautiful photography and insightful information.” –Instagram: @dallasbeerbabe

“Atlas of Beer is a vibrant and rich source of impressive #beer information. The atlas highlights countries and regions, explaining local history and styles…a must have for lovers of beer and travel alike.” –Instagram: @sargentsuds

“This one will be hanging out on my coffee table and will undoubtedly inspire an upcoming beercation.” –Instagram: @beerbitty

“It is packed full of incredible photos, illustrations & interesting information…It also contains plenty of travel tips, such as, beer festivals, how to order beer in 14 languages & the best breweries & pubs in each country.” –Instagram: @thehoppytraveller