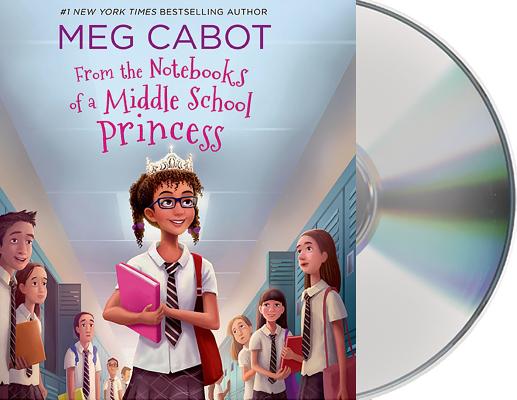 By Meg Cabot, Kathleen McInerney (Read by)
$27.49
Email or call for price.

Return to the world of Meg Cabot's bestselling and beloved Princess Diaries series in From the Notebooks of a Middle School Princess...

Olivia Grace Clarisse Mignonette Harrison is a completely average twelve-year-old: average height, average weight, average brown hair of average length, average brown skin and average hazel eyes. The only things about her that aren't average are her name (too long and princess themed), her ability to draw animals (useful for her future career as a wildlife illustrator), and the fact that she is a half-orphan who has never met her father and is forced to live with her aunt and uncle (who treat her almost like their own kids, so she doesn't want to complain).

Then one completely average day, everything goes wrong: the most popular girl in school, Annabelle Jenkins, threatens to beat her up, the principal gives her a demerit, and she's knocked down at the bus stop . . .

Until a limo containing Princess Mia Thermopolis of Genovia pulls up to invite her to New York to finally meet her father, who promptly invites her to come live with him, Mia, Grandmère and her two fabulous poodles . . . .

Meg Cabot is the #1 New York Times-bestselling author of the beloved and critically acclaimed Princess Diaries series, which were made into wildly popular Disney movies of the same name. There have been over 25 million copies of Meg’s books for both adults and teens/tweens sold in 38 countries. Her last name rhymes with habit, as in “her books can be habit-forming.” She currently lives in Key West, Florida, with her husband and various cats.

She has appeared onstage in New York and around the United States in both classical and contemporary theater. Her credits also include television commercials, daytime drama, radio plays, and animation voice-overs.