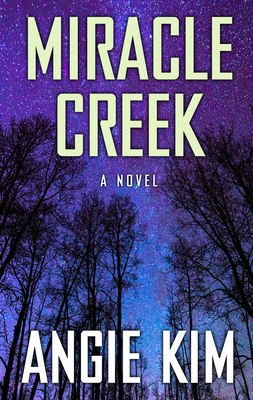 By Angie Kim
Email or call for price
Hard to Find

In a small Virginia town, the Yoo family owns a medical treatment business that uses a pressurized oxygen chamber that is supposed to cure a wide variety of conditions. One night during a treatment session the chamber unexpectedly explodes and kills some of the patients inside. Early on is abundantly clear that the explosion isn’t an accident and a engrossing murder mystery unfolds.

A thrilling mystery that follows the aftermath of a pressurized oxygen chamber explosion that killed two people. Everyone has secrets and everyone has a different story about what happened the day of the explosion. Kim gives a fresh take on a courtroom drama in this powerful debut.

“Miracle Creek is a courtroom drama with impeccable pacing, an original plot, and stellar writing. It’s also a remarkably empathetic book, exploring the ripple effects of causality and the urgent need to do right by each other in big and small ways, recognizing that even the best of us will fail once in a while. It is a lovely reminder that even when doing the right thing feels like swimming upstream, we never know what harm may be prevented and what good might come from our actions. Agreat read that deserves broad success.”
— Sara Hinckley, Hudson Booksellers, Marietta, GA

An Indie Next and LibraryReads SelectionYoung and Pak Yoo run the Miracle Submarine ? an experimental oxygen chamber for curing issues like autism or infertility. But when it explodes, killing two people, a murder trial upends their lives.

Angie Kim moved as a preteen from Seoul, South Korea, to the suburbs of Baltimore. She attended Stanford University and Harvard Law School, where she was an editor of the Harvard Law Review, then practiced as a trial lawyer at Williams & Connolly. Her stories have won the Glamour Essay Contest and the Wabash Prize in Fiction, and appeared in numerous publications including The New York Times, Salon, Slate, The Southern Review, Sycamore Review, The Asian American Literary Review, and PANK. Kim lives in northern Virginia with her husband and three sons.