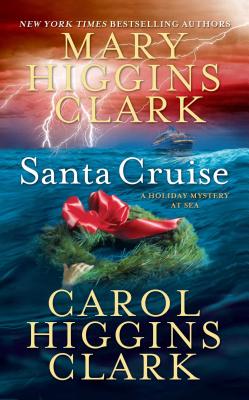 America’s Queen of Suspense—Mary Higgins Clark—joins forces with her daughter Carol—bestselling author of the Regan Reilly mysteries—in this fast-paced novel set on a special holiday cruise that sets sail from Miami the day after Christmas.

Alvirah Meehan, lottery winner turned amateur sleuth, and private investigator Regan Reilly are guests, along with their spouses, on the “Santa Cruise.” The cruise is a gift from Commodore Randolph Weed to a select group that “has made the world a better place.” His largesse is prompted by the desire to create a buzz about his new cruise ship, the Royal Mermaid, as she sets out on her maiden voyage.

Alvirah, Regan, and her new husband Jack—head of the NYPD Major Case Squad—are joined as guests on the cruise by a mystery fan convention, celebrating “a ghost of honor,” as well as ten men who donated time playing Santa Claus, now hoping for a restful post-season. That tranquility vanishes when two Santa suits disappear from a locked room, a storm develops, and an attempt is made on a passenger’s life. As the Royal Mermaid sails through troubled waters, Alvirah, Regan, and Jack uncover clues that lead them to dangerous criminals not on the original guest list…

The #1 New York Times bestselling author Mary Higgins Clark wrote forty suspense novels, four collections of short stories, a his­torical novel, a memoir, and two children’s books. With bestselling author Alafair Burke she wrote the Under Suspicion series including The Cinderella Murder, All Dressed in White, The Sleeping Beauty Killer, Every Breath You Take, and You Don’t Own Me. With her daughter Carol Higgins Clark, she coauthored five more suspense novels. More than one hundred million copies of her books are in print in the United States alone. Her books are international bestsellers.

Carol Higgins Clark is the author of the bestselling Regan Reilly mysteries. She is coauthor, along with her mother, Mary Higgins Clark, of a bestselling holiday suspense series. Also an actress, Carol Higgins Clark studied at the Beverly Hills Playhouse and has recorded several novels. She received AudioFile’s Earphones Award of Excellence for her reading of Jinxed. She lives in New York City.