This Burns My Heart: A Novel (Paperback) 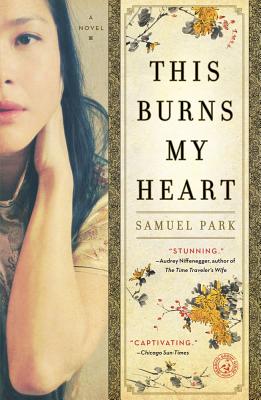 This Burns My Heart: A Novel (Paperback)

“In South Korea in 1960, Soo-Ja Choi is a beautiful young woman from a well-to-do family. As the country is struggling to recover from a divisive war and tries to enter the modern world, Soo-Ja is exploring her options as a young adult. When her father does not allow her to accept a position studying to be a diplomat, he destroys her dreams. Over the next 15 years, she struggles with her life decisions, her new family, and a love she gave up before she understood the permanence of choice. A compulsive read, the novel is based on the life of Park's mother.”
— Terry Gilman, Mysterious Galaxy Books, San Diego, CA

In this "extraordinary" (Chicago Tribune) and compelling love story set in postwar Korea in the 1960s, an unhappily married woman struggles to give her daughter a good life and to find love in a society caught between ancient tradition and change.

On the eve of her marriage, beautiful and strong-willed Soo-Ja Choi receives a passionate proposal from a young medical student. But caught up in her desire to pursue a career in Seoul, she turns him away, having impetuously chosen another man who she believes will let her fulfill her dreams. Instead, she finds herself tightly bound by tradition and trapped in a suffocating marriage, her ambition reduced to carving out a successful future for her only daughter. Through it all, she longs for the man she truly loves, whose path she seems destined to cross again and again. In This Burns My Heart, Samuel Parks has crafted a transcendent love story that vibrantly captures 1960s South Korea and brings to life an unforgettable heroine.
Samuel Park was an Associate Professor of Creative Writing at Columbia College Chicago. He graduated from Stanford University and the University of Southern California, where he earned his doctorate. He is the author of the novella Shakespeare’s Sonnets and the writer-director of a short film of the same name, which was an official selection of numerous domestic and international film festivals. He is also the author of the novels This Burns My Heart and The Caregiver. His nonfiction has appeared in The New York Times. Born in Brazil and raised in Los Angeles, he split his time between Chicago and Los Angeles. In April 2017, Samuel Park died of stomach cancer at the age of 41 shortly after finishing The Caregiver.
“An incredible read . . . I don’t want it to end. I love it!” —Hoda Kotb, Today

“Extraordinary . . . A page-turner of a book . . . South Korea provides not only the backdrop of Soo-Ja’s story, but also the context for Park’s novel, which spans the decades after the Korean War to the beginning of the country’s economic boom. In a sense, Soo-Ja’s story parallels South Korea’s development from a poor, struggling state to a gleaming Asian tiger.” —Chicago Tribune

“Memorable . . . Atmospheric and exuberantly filmic . . . a simple but visceral romance in a refreshing Korean setting.” —The Miami Herald

“Park does a good job of bringing the rapidly changing South Korea of the 1960s alive. As cities sprout from beanfields and rickshaws give way to Kias, the world around Soo-Ja and her family is changing at a frightening speed. . . . I especially recommend this novel to readers who were intrigued (as was I) by Lisa See’s Dreams of Joy, set in postwar China. The contrast is fascinating.” —The Christian Science Monitor

“This Burns My Heart is quietly stunning—a soft, fierce story that lingers in the mind. Samuel Park is a deft and elegant writer; this is a very exciting debut.” —Audrey Niffenegger, author of The Time Traveler’s Wife

“Vivid…atmospheric . . . Park’s descriptions of antigovernment clashes and the martyrdom of a 12-year-old boy, in particular, provide eerily prescient reverberations of recent clashes in Syria.” —Boston Globe

“Writing prose with the beauty of poetry, Samuel Park traces a young woman's journey to hard-won maturity, alongside the meteoric rise of post-war Korea, in a novel which shines with eloquence and wisdom.” —David Henry Hwang, Tony-Award winning author of M. Butterfly

“This Burns My Heart is a delicate yet powerful story of love, loss, and endurance. The emotional world of the heroine, Soo-Ja, is beautifully realized; I found myself caught up in her dramas from start to finish.” —Sarah Waters, author of The Little Stranger and Fingersmith

“Park does a good job of bringing the rapidly changing South Korea of the 1960s alive. As cities sprout from beanfields and rickshaws give way to Kias, the world around Soo-Ja and her family is changing at a frightening speed. . . . I especially recommend this novel to readers who were intrigued (as was I) by Lisa See’s Dreams of Joy, set in postwar China. The contrast is fascinating.” —The Christian Science Monitor