Fur, Feather, Fin—All of Us Are Kin (Hardcover) 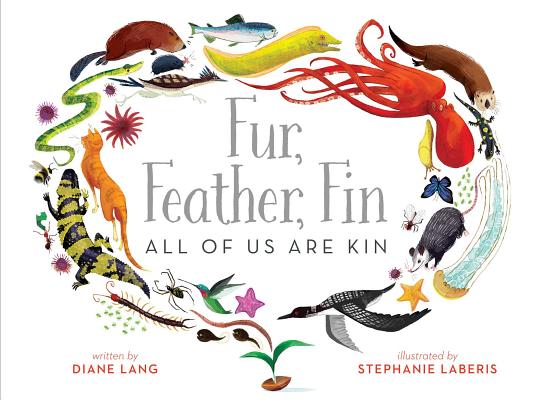 Fur, Feather, Fin—All of Us Are Kin (Hardcover)


Usually Ships in 1-5 Days
Come along on a rhyming tour through the amazing animal kingdom—from mammals to millipedes and everything in between—with this engaging picture book about how all creatures are connected!

There are so many wild and wonderful animals in our world. Some have fur, some have feathers, some have fins, but all are connected. This fact-filled rhyming exploration of the diversity of the animal kingdom celebrates mammals, birds, insects, fish, reptiles, amphibians, and more! It’s a perfect match for budding naturalists and animal enthusiasts everywhere.
Diane Lang lives in northern California, where she volunteers at wildlife centers in Walnut Creek and Hayward, and occasionally travels to one in Pasadena, talking with children and adults about our natural world. She especially likes to share the fascinating and wonderful aspects of some of our most overlooked wild neighbors—turkey vultures, snakes, spiders, and more. See some her nature favorites and a few of her poems at DianeLang.net.

Stephanie Laberis is a freelance illustrator and character designer for animation. Originally from New England, she now lives in Northern California with her wonderful partner, a couple of felines, and a handful of rodents. Her love for art is rivaled only by her love for animals, and she spends her spare time as a volunteer wildlife rehabber. She loves painting, needle felting, and losing herself in a good video game.
From the seagulls in flight on the end pages onward, readers are taken on a journey through the natural world. Various environments and seasons are displayed on bright double-page spreads. Creatively placed rhyming text introduces us to many different animals, and shows what they have in common. Often, it’s surprising: readers may not know that both crabs and butterflies (as well as many insects) are arthropods. Curves dominate the scene, from the circle on the cover to the tide pool on the final page, and even the language reverberates with movement. Lang reminds us that we don’t yet understand all animals on earth, but Laberis’ illustrations make them accessible and charming, with most animals seen in families or at least pairs. The world of her illustrations is warm and inviting; even the dark, deep ocean is mitigated by the playful swirls of octopus tentacles. Endnotes add more information for the curious reader. Pair with Creature Features: 25 Animals Explain Why They Look the Way They Do (2014), by Steve Jenkins and Robin Page. — Edie Ching
— Booklist

Major similarities and differences among six classes of animals—and two additional animal categories—are explained with the aid of simple rhymes and sophisticated art. A text that aspires to reveal nature facts using rhythm and rhyme can easily fall into pitfalls—sometimes sacrificing meaning for good scansion or vice versa. Amazingly, this book manages to convey elemental facts about animals with verse that both scans and informs. The initial double-page spread shows two children gazing at creatures in a tide pool. The book's opening (and closing) lines emphasize the idea that Earth's animals have many tangible differences but also that all are, as the subtitle says, "kin." Variations that categorize each family are discussed and illustrated in the pages that follow. An excellent double-page spread of appealing mammals illustrating the qualifying traits of milk, fur, warmbloodedness, live birth, and parental care is followed by an equally thoughtful spread with a lineup of humans as mammals that contains diversity in terms of race, ethnicity, and the many ways that human families are defined. Categories beyond common animal families include "detritovores," which merits this descriptive—and humorous—couplet: "Detritovores, so oft forgotten, / dine on things both dead and rotten." As with the rest of the text, the couplet is followed by further explanation of the category and accompanied by vibrant, detailed art. Backmatter provides both further information and resources for readers who want to help animals. A very welcome addition to nature shelves. (Informational picture book. 3-8)
— Kirkus STARRED REVIEW

The book opens with a big idea: “All animals on Earth are kin, while not the same outside or in.” Various classes of animals are then introduced—birds, amphibians, reptiles, and a few “mixed categories” such as water dweller. Rhyming text is used throughout to define each group and briefly mention its features. For example, the book defines amphibians (“Changing body, smooth, moist skin: that is an amphibian.”) and then shows the process of metamorphosis—a tadpole changing into a toad, salamander, frog, or newt. The colorful illustrations work seamlessly with the text to both reinforce the written information and add additional details. Back matter provides more information about each creature covered and gives additional sources for further investigation. Pair this book with Jonathan Tweet’s Grandmother Fish: A Child’s First Book of Evolution more animal-related science for young learners. VERDICT A clear, inviting introduction to the study of animals. A very good choice for reading aloud and discussing.
— School Library Journal

“All animals on Earth are kin,/ while not the same outside or in./ Some we stroke with loving hand;/ some we don’t yet understand,” writes Lang in this uplifting celebration of life that identifies and groups animals according to their taxonomic class. Laberis renders the animal groups in a warm, naturalistic style. One spread features a series of mammal mothers and offspring—a bear and cubs, a cat nursing kittens, and a whale and calf. Other spreads show a small number of animals within their natural habitats, including a spider in its web, a frog and tadpoles in a pond, and an octopus in its den. Lang highlights the biodiversity of her subjects through her vivid verses: “Detrivores, so oft forgotten,/ dine on things both dead and rotten./ Worms and bugs make their dessert of rot into the richest dirt./ Underground or deep in bark…/they’re heroes of the damp and dark.” One spread features a diverse group of human families (“yes, we’re mammals, too!”), emphasizing the interconnectedness of all living things.
— Publishers Weekly