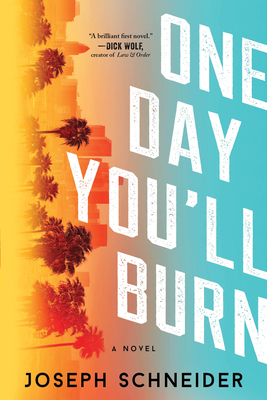 This is book number 1 in the LAPD Detective Tully Jarsdel Mysteries series.

An incredible debut from up-and-coming author Joseph Schneider. Detective Tully Jarsdel may not be a typical Los Angeles cop—but he's the only one who can solve this case

A body so badly burned that it could be mistaken for a movie prop... except for the smell. That's not something California law enforcement finds lying on the street every day. And when Detective Tully Jarsdel is called to the scene, it's clear to him that something about the placement of the corpse is intentional, even ritualistic. Jarsdel isn't a classic noir detective, but his former career in academia seems to finally be coming in handy, rather than serving as material for jokes from his partner, Morales.

But nothing Jarsdel learned in school can prepare him for the deep evil behind this case, which appears to be as hopeless as it is violent. As Jarsdel and Morales attempt to settle their differences and uncover the motive behind the horrendous crime, they find themselves dragged into the underbelly of a city notorious for chewing up and spitting out anyone dumb enough to turn their back on survival.

One Day You'll Burn is a shimmering debut that captures the glitz and squalor of Los Angeles while introducing an unforgettable detective readers will rank among the best in the genre.

The first in the LAPD Detective Jarsdel series, this detective mystery is:

Joseph Schneider lives with his wife and two children in California. His professional affiliations include The Magic Castle and the Imperial Society of Teachers of Dancing. One Day You’ll Burn is his debut novel.

"An auspicious and engaging debut. Mr. Schneider conjures up an original protagonist in LAPD Homicide Detective Tully Jarsdel—and prestidigitates a thoroughly thrilling narrative ride through the mean streets and glittering boulevards of Los Angeles. The reader looks forward to many more Jarsdel mysteries in the coming years." — Eric Overmyer, executive producer of Bosch

"One Day You’ll Burn is much more than just an intriguing Hollywood mystery, it’s a captivating character study of a unique academic/historian-turned-police-detective who can’t keep his deep intelligence from bubbling out -- often to his own embarrassment and the reader’s delight. Joseph Schneider has created a very appealing character whom readers will definitely want to see more of." — Kenneth Johnson, bestselling author of The Man of Legends

"Schneider redefines the detective genre while giving us a history lesson of Hollywood, the town of dreams it was, and the nightmare it has become." — Jim Hayman, executive producing director of NCIS: New Orleans

"One Day You’ll Burn knocked me out. It’s a riveting, richly-layered detective novel that satisfies and surprises on every single page. Joseph Schneider is a major new talent in the world of crime fiction." — Lou Berney, Edgar Award-winning author of The Long and Faraway Gone

"The solid debut police procedural is an homage to Hollywood and its history, with descriptive details of corners of Hollywood, classic films, and even traffic jams. The atmospheric mystery introduces a fascinating new detective who will appeal to fans of Michael Connelly’s Harry Bosch" — Library Journal

"There’s a lot of good detective work and excellent characterization in this debut procedural that features one of the most original heroes to come out of the genre in a long while. " — Criminal Element

"ONE DAY YOU’LL BURN... stars a memorable character who you will want to see more of very soon." — Booklist

" Fans of James Ellroy or Raymond Chandler will enjoy the vibe of One Day You'll Burn, the first in a projected series. " — Shelf Awareness

"Under its Poisoned Press imprint, Sourcebooks packs a debut police procedural from Joseph Schneider that dips into the grotesque and bizarre, while walking through what at first seems like ordinary Los Angeles life. LAPD Detective Tully Jarsdel, a former academic who's not yet trusted by his colleagues, snags a case that hangs on both a screenplay and some of the most twisted tortures of the past—the LONG past (think Greek mythos, even). Jarsdel himself, protagonist of a promised series, is a surprisingly sweet guy who tangles in an affectionate way with one of the crime victims along his path—made miserable and lonely by the work of a serial pet killer who strikes during the weddings of the pet owners. ONE DAY YOU'LL BURN is a grim title and threatens horrendous torture along the way, but includes a lot of pure LA "camp" with a lot of film fun—and I couldn't put it down. I kept hoping Jarsdel might prove himself and 'get the girl' at the same time. There's even a moment when 'He now knew, in painstaking detail, how G—had died.' But instead there's a highly satisfying and grim ending ahead. Make room on the bookshelf for the sequels" — Kingdom Books