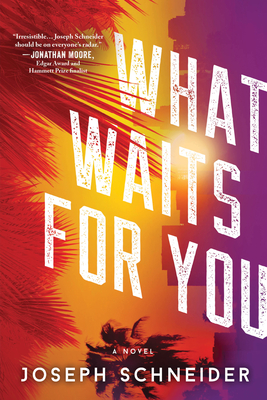 This is book number 2 in the LAPD Detective Tully Jarsdel Mysteries series.

The nightmare descends on a Tuesday. An elderly couple's home is transformed into a scene straight out of a horror film, their mutilated bodies the only clue left behind by the killer—and they are only the unlucky first in a series of impossible crimes. Soon dubbed the Eastside Creeper, the murderer stalks Hollywood, camping out undetected in his victims' homes until he's ready to strike. After killing, he vanishes like smoke.

Considered an expert in the grotesque, Detective Tully Jarsdel lands this seemingly unsolvable case. Jarsdel, an academic-turned-cop, is intrigued by the Eastside Creeper. The Creeper's methods are vicious, his path untraceable—nothing about this killer makes sense. But as the murders become more gruesome and the clues more inscrutable, widespread panic sets in. And amid the terror and suspicion, Jarsdel's unconventional investigation may be the only thing left between a killer and a city about to descend into chaos.

What Waits for You is the hardboiled detective story of a terrified community, the only cop in LA who might be able to put a stop to the hysteria, and a murderer with nothing left to lose.

Joseph Schneider lives with his wife and two children in California. His professional affiliations include The Magic Castle and the Imperial Society of Teachers of Dancing. One Day You’ll Burn is his debut novel.

"LA native Joseph Schneider shows off his roots once again, leading the reader and quirky detective Tully Jarsdel on a richly-detailed, highly-nuanced mystery through the City of Angels." — Joseph Reid, author of the Amazon Charts bestselling Seth Walker series

"What Waits For You is irresistible. I read it in a blur, and it stuck to me like a shadow when I was finished. Joseph Schneider should be on everyone’s radar." — Jonathan Moore, Edgar Award and Hammett Prize finalist

"Schneider's riveting prose, incredibly original protagonist Tully Jarsdel, and brilliant evocation of a L.A. add up to a novel you won't be able to put down. A read that will get under your skin and stay there for a while. I can't wait for the next book!" — Luca Veste, author of The Bone Keeper

"An abrasive, erudite detective matches wits with an uber-violent serial killer.When Bill and Joanne Lauterbach's worried daughter is unable to reach them for days, police check out the couple's home. Rookie patrolman Evan Porter and his training supervisor, Sgt. Melissa Banning, find a chaotic, horrific scene. Porter announces cryptically that 'the house is bleeding' before going inside, where he's violently attacked, ending up in the ICU. Banning's not so lucky. This is the fourth bloody incident involving The Eastside Creeper, a killer believed to spend hours hiding inside other people's homes before he violently strikes. Nerves in Los Angeles are already frayed because of a massive earthquake a week earlier, and morale at the Hollywood police station is understandably low. Enter sardonic, overeducated LAPD detective Tully Jarsdel, who banters with his partner, Morales, over the killer's profile. Bureaucratic scrambling comes to the fore as Jarsdel's taken off the case, then invited onto Hollywood Special, the new unit handling it. Tensions rise even higher after the wife of the lieutenant leading the Special becomes a victim. The road to apprehension is full of detours that accommodate Schneider's juicy prose and quirky characters. There's an extended feud with Jarsdel's increasingly irrational father. And Jarsdel, who left a Ph.D. program in English to join the force, describes the opinions of colleague and possible love interest Alisha Varna as 'obelisks of intellectual rigor.' A buoyant, unrestrained Grand Guignol noir, relishing the journey, indifferent to the destination." — Kirkus Reviews