An Extraordinary Union: An Epic Love Story of the Civil War (The Loyal League #1) (Paperback) 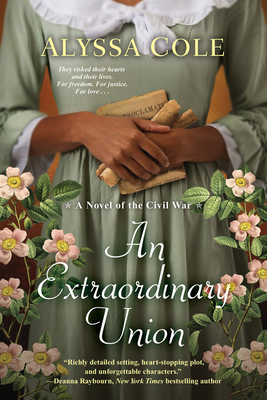 An Extraordinary Union: An Epic Love Story of the Civil War (The Loyal League #1) (Paperback)

This is book number 1 in the The Loyal League series.

As the Civil War rages between the states, a courageous pair of spies plunge fearlessly into a maelstrom of ignorance and danger, combining their unique skills to alter the course of history and break the chains of the past in New York Times bestselling Alyssa Cole’s first installment in The Loyal League...

1861. Elle Burns is a former slave with a passion for justice. She also possesses a photographic memory. She has the rare fortune—a human right—to live a free life. But to spy for the Union Army, she is willing to risk the brutal indignity of the slave system deeply entrenched in the South.

Malcolm McCall is a seasoned detective for Pinkerton's Secret Service. His latest mission is his riskiest yet: to infiltrate and embed himself within a Rebel Virginia enclave. Together with Elle, these two brave spies stumble across a plot that could turn the tide of the war in the Confederacy's favor. Caught in a tightening web of wartime intrigue, Malcolm and Elle must make their boldest move to preserve the Union at any cost—even if it means losing each other . . .

“Blending the high stakes of history with convincing emotional connections, every installment in Cole's Civil War-set
trilogy are must-reads.” —Oprah Daily
Alyssa Cole is an award-winning, New York Times and USA Today bestselling author of contemporary suspense and historical, contemporary, and sci-fi romance. Her Civil War-set espionage romance An Extraordinary Union was the American Library Association’s RUSA Best Romance for 2018, and A Princess in Theory was one of the New York Times’ 100 Notable Books of 2018. She’s contributed to publications including Bustle, Shondaland, The Toast, Vulture, and Heroes and Heartbreakers, and her books have received critical acclaim from The New York Times, Library Journal, BuzzFeed, Kirkus, Booklist, Jezebel, Vulture, Book Riot, Entertainment Weekly, and various other outlets.  Her books have landed on Best of lists from Entertainment Weekly, Vulture, Essence, Newsweek, Bookpage, Kirkus, Publishers Weekly, Library Journal, Booklist, among others. Visit her online at AlyssaCole.com.