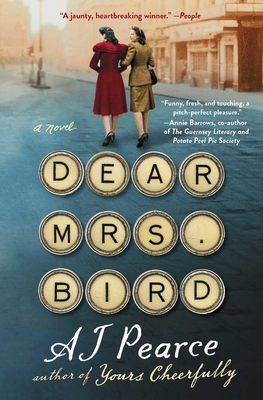 This is book number 1 in the The Emmy Lake Chronicles series.

Not just another WWII book - this one has humor!  Young woman wants to help the war effort as a war correspondent, but gets assigned to the “women’s column” in the local paper. Sweet and full of heart.

“What initially seems like a breezy career girl story quickly turns into a gripping novel set in the WWII London blitzkrieg. During the nightly bombing runs, Emmeline volunteers at a nearby fire dispatch center. She dreams of becoming a journalist, but instead lands a day job screening advice-seeking letters for a weekly magazine, Woman’s Friend. All too soon, she and her friends become victims of the bombings and must deal with losses and new horrors each night. In Dear Mrs. Bird, AJ Pearce has given us a most memorable story about both the visible and hidden casualties of war. Recommended for all, including book clubs!”
— Nancy Simpson-Brice, Book Vault, Oskaloosa, IA

“A plucky young British woman in London during the Blitz dreams of becoming a war correspondent. In her inglorious first job as a typist for a women’s advice columnist, she manages to do a lot of good while getting into lots of trouble. Dear Mrs. Bird is very entertaining, with a balance of comedy and pathos. This is a great choice for a summer read.”
— Patty Mullins, Oblong Books and Music, Millerton, NY

This charming, irresistible debut novel set in London during World War II about a young woman who longs to be a war correspondent and inadvertently becomes a secret advice columnist is “a jaunty, heartbreaking winner” (People)—for fans of The Guernsey Literary and Potato Peel Pie Society and Lilac Girls.

Emmeline Lake and her best friend Bunty are doing their bit for the war effort and trying to stay cheerful, despite the German planes making their nightly raids. Emmy dreams of becoming a Lady War Correspondent, and when she spots a job advertisement in the newspaper she seizes her chance; but after a rather unfortunate misunderstanding, she finds herself typing letters for the formidable Henrietta Bird, renowned advice columnist of Woman’s Friend magazine.

Mrs. Bird is very clear: letters containing any Unpleasantness must go straight into the bin. But as Emmy reads the desperate pleas from women who many have Gone Too Far with the wrong man, or can’t bear to let their children be evacuated, she begins to secretly write back to the readers who have poured out their troubles.

“Fans of Jojo Moyes will enjoy AJ Pearce’s debut, with its plucky female characters and fresh portrait of women’s lives in wartime Britain” (Library Journal)—a love letter to the enduring power of friendship, the kindness of strangers, and the courage of ordinary people in extraordinary times. “Headlined by its winning lead character, who always keeps carrying on, Pearce's novel is a delight” (Publishers Weekly). Irrepressibly funny and enormously moving, Dear Mrs. Bird is “funny and poignant…about the strength of women and the importance of friendship” (Star Tribune, Minneapolis).

AJ Pearce grew up in Hampshire, England. She studied at the University of Sussex and Northwestern University. A chance discovery of a 1939 women’s magazine became the inspiration for her series The Emmy Lake Chronicles, which includes Dear Mrs. Bird, Yours Cheerfully, and Mrs. Porter Calling. She lives in the south of England.

“Funny, fresh, and touching, Dear Mrs. Bird is a pitch-perfect pleasure. It’s a rare and wonderful thing to read a book that seems to live properly in its era.”
—Annie Barrows, New York Times bestselling co-author of The Guernsey Literary and Potato Peel Society

“A joy from start to finish. Dear Mrs. Bird is as funny as it is heartwarming.”
—John Boyne, author of The Heart's Invisible Furies

"I relished every moment of Dear Mrs. Bird. What a joy! Hilarious, heartwarming, and unutterably charming."
—Jennifer Ryan, author of The Chilbury Ladies' Choir

“There is more to this very English novel than first meets the eye . . . a delightful read — funny and poignant . . . It is about the home front during war, yes, but even more it is about the strength of women, the importance of friendship and the toll of stoicism.
—Laurie Hertzel, Minneapolis Star Tribune

“Vividly evocative of wartime life… a very English tribute to the women of the homefront.” —Kirkus

"Set against a backdrop of war-torn London, this is a charming and heartfelt novel. Pearce brings to life a tale of true friendship, and how love will outlast even the most challenging times."
—Booklist

"Clever... The novel has a wonderfully droll tone, a reminder of the exuberance of youth even under dire circumstances. Headlined by its winning lead character, who always keeps carrying on, Pearce’s novel is a delight."
—Publishers Weekly

"Emmeline Lake, the heroine of Dear Mrs. Bird, is the most endearing character to emerge from the world of British fiction since Bridget Jones. She’s funny, she’s indefatigable, and she faces the worst of circumstances with the pluckiest of resolves. You cannot help but love her."—Kimmery Martin, author of The Queen of Hearts

"A winning wartime romp, as hilarious as it is moving . . . the novel's spirit is madly winning, and its foregrounding of wartime women seems spiffingly modern."
—The Guardian

“Books that make you shake with laughter and sob with tears are rare.  I gulped this one down but didn’t stop thinking about it for a long time.”
—Katie Fforde, author of A Secret Garden

“Utterly charming and helplessly funny.”
—Jenny Colgan, author of The Bookshop on the Corner