The Last Thing He Told Me: A Novel (Hardcover) 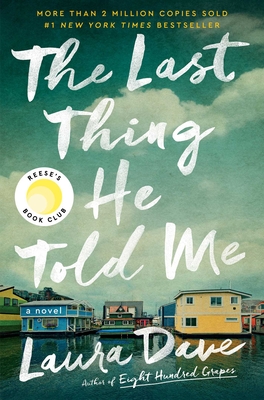 The Last Thing He Told Me: A Novel (Hardcover)

“I adore Laura Dave and absolutely loved The Last Thing He Told Me. Wonderful characters, amazing writing, and a twisty plot kept me turning the pages as fast as I could. Truly unputdownable and a thoroughly enjoyable read!”
— Kaitlin Smith, Copperfield's Books Healdsburg, Healdsburg, CA

The instant #1 New York Times bestselling mystery and Reese Witherspoon Book Club pick that’s captivated more than two million readers about a woman searching for the truth about her husband’s disappearance…at any cost.

“A fast-moving, heartfelt thriller about the sacrifices we make for the people we love most.” —Real Simple

Before Owen Michaels disappears, he smuggles a note to his beloved wife of one year: Protect her. Despite her confusion and fear, Hannah Hall knows exactly to whom the note refers—Owen’s sixteen-year-old daughter, Bailey. Bailey, who lost her mother tragically as a child. Bailey, who wants absolutely nothing to do with her new stepmother.

As Hannah’s increasingly desperate calls to Owen go unanswered, as the FBI arrests Owen’s boss, as a US marshal and federal agents arrive at her Sausalito home unannounced, Hannah quickly realizes her husband isn’t who he said he was. And that Bailey just may hold the key to figuring out Owen’s true identity—and why he really disappeared.

Hannah and Bailey set out to discover the truth. But as they start putting together the pieces of Owen’s past, they soon realize they’re also building a new future—one neither of them could have anticipated.

With its breakneck pacing, dizzying plot twists, and evocative family drama, The Last Thing He Told Me is a riveting mystery, certain to shock you with its final, heartbreaking turn.
Laura Dave is the #1 New York Times bestselling author of The Last Thing He Told Me, Eight Hundred Grapes, and other novels. Her books have been published in thirty-eight countries and have been chosen by Reese Witherspoon’s Book Club, Book of the Month Club, and the Richard and Judy Book Club. The Last Thing He Told Me was chosen as the Goodreads Mystery & Thriller of the Year for 2021. It is soon to be a limited series on Apple TV+, cocreated by Laura. She resides in Santa Monica, California.
"Dave’s neat trick is to unveil revelations at a brisk clip that does not overwhelm character development. The novel’s richness comes from the way Hannah and Bailey realize they need each other in the face of staggering loss; the mutual trust that grows between them is genuinely moving. As both daughter and stepmother come to realize, “That’s how you fill in the blanks — with stories and memories from the people who love you.”  — The New York Times Book Review

“The Last Thing He Told Me by Laura Dave is a fast-moving, heartfelt thriller about the sacrifices we make for the people we love most.” — Real Simple

“Light and bright, despite its edgy plot.” — Vogue

"You will not think that this is Laura’s first suspense novel as it's so sharp and well done." — Book Reporter

“Dave pulls off something that feels both new and familiar: a novel of domestic suspense that unnerves, then reassures. This is the antithesis of the way novels like Gone Girl or My Lovely Wife are constructed; in The Last Thing He Told Me, the surface is ugly, the situation disturbing, but almost everyone involved is basically good underneath it all. Dave has given readers what many people crave right now—a thoroughly engrossing yet comforting distraction.” — BookPage

“Laura Dave's The Last Thing He Told Me is a thrilling roller coaster of a novel. This smart, intimate exploration of love and family is the foundation of a beautifully constructed mystery filled with twists and turns. A must-read.” — Jean Kwok, New York Times bestselling author of Searching for Sylvie Lee

“What starts as an intimate meditation on found families deftly turns into a heart-pounding mystery reminiscent of the best true crime stories. But both work so beautifully in this gripping, perfectly-paced novel. I dare you to stop reading.” — Susie Yang, New York Times bestselling author of White Ivy

"With dizzying suspense and gorgeous prose, The Last Thing He Told Me tackles tough questions about trust, marriage and what it means to be a family. A page-turner of the highest order." — Riley Sager, New York Times bestselling author of Home Before Dark

“Laura Dave is a master story-teller. Gripping, big-hearted and twisty, The Last Thing He Told Me grabs readers from the very first page and never lets go.” — Greer Hendricks, New York Times best-selling co-author of The Wife Between Us and You Are Not Alone