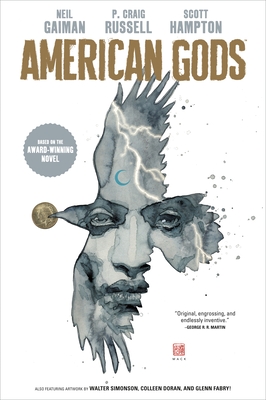 This supernatural American road trip fantasy tells the story of a war between the ancient and modern gods. The Hugo, Bram Stoker, Locus, World Fantasy, and Nebula award-winning novel and new Starz television series by Neil Gaiman is adapted as a graphic novel for the first time!

The first in a three-volume adaptation of Neil Gaiman's modern classic!

Shadow Moon gets out of jail only to discover his wife is dead. Defeated, broke, and uncertain where to go from here, he meets the mysterious Mr. Wednesday, who employs him to serve as his bodyguard--thrusting Shadow into a deadly world where ghosts of the past come back from the dead, and a god war is imminent.

Some of his most notable titles include the groundbreaking #1 New York Times bestselling Sandman comics series (which garnered nine Eisner Awards and the World Fantasy Award for Best Short Story); The Graveyard Book (the first book ever to win both the Newbery and Carnegie medals); American Gods (which will soon be released as a television show in the US); and The Ocean at the End of the Lane, the UK's National Book Award 2013 Book of the Year.

The film adaptation of How to Talk to Girls at Parties (directed by John Cameron Mitchell) will be in theaters in 2017.
“Gaiman--who is best known as the creator of the respected DC Comics ''Sandman'' series--has a deft hand with the mythologies he tinkers with here; even better, he's a fine, droll storyteller.”—The New York Times

“If you’re excited for the show and want to know what to expect from what looks like it could be the Next Big Thing on TV, make sure to pick this up”--IGN

“What better time than now to adapt American Gods into sequential art, and who better to do it than P. Craig Russell and Scott Hampton, two masters of the craft known in part for their collaborations with Gaiman in the past?.”--PASTE MAGAZINE

“This adaptation is perfect.”--GEEKS OF DOOM

“Dark Horse has another hit on its hands …. They’re going to have whole bunch of new readers falling in love with the story for the first time as well as OG fans finding a new way to love the story in a new and exciting way.”--GRAPHIC POLICY

“Dark Horse’s comic book adaption is an appropriate tribute to his long-form vision... Although both mediums are image-oriented and the source material is the same, adapting the novel to television versus comic books offers an entirely different set of circumstances and challenges, ones which should make both takes unique in their own right; giving fans of American Gods an entertaining fable set to unravels in two varied mediums.”--SCREEN RANT

“Visually striking… will appeal to new readers and those existing fans.”--BLEEDING COOL

“This can easily become your next favorite title.”--COMICS GRINDER

“I knew this would be good, but it was actually great.”--13TH DIMENSION

"By staying true to its source material and retaining Gaiman's strong narrative voice, AMERICAN GODS #1 presents a stellar example of how to make an adaptation." -COMICVERSE

“Neil Gaiman is one of those once in a millennia creators, much like Shakespeare, whose work is thought-provokingly complex yet interpretable on multiple levels. P. Craig Russell is one of those creators whose made an artform out of translating cherished works to the comic book medium.”--COMICS BEAT