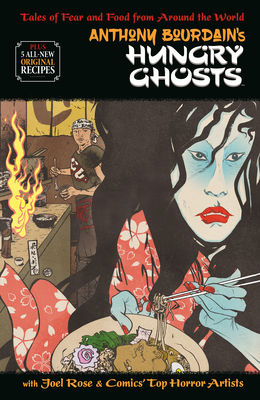 Featuring all-new original recipes prepared by Bourdain, plus a yellow ribbon bookmark , and a guide to the ghostly legendary spirits behind these horrifying tales. This horror anthology is sure to please--and scare!

On a dark, haunted night, a Russian Oligarch dares a circle of international chefs to play the samurai game of 100 Candles--where each storyteller tells a terrifying tale of ghosts, demons and unspeakable beings--and prays to survive the challenge.

Inspired by the Japanese Edo period game of Hyakumonogatari Kaidankai, Hungry Ghosts reimagines the classic stories of yokai, yorei, and obake, all tainted with the common thread of food.

"The expanded version of Anthony Bourdain's Hungry Ghosts . . . reimagines the Japanese tradition of Hyakumonogatari Kaidankai with a particularly spooky twist, as a group of chefs tell a series of stories linked by the common themes of the supernatural and food, each illustrated by artists like Vanesa Del Rey, Francesco Francavilla and Paul Pope. Of course, like all good ghost stories, there's a twist in the tale." --The Hollywood Reporter

"A series of gastronomic ghost stories that bring together ... [Bourdain's] love of food, Japanese culture and old-school horror comics, plus some new recipes... An all-star roster of illustrators, from alt-comics legend Paul Pope to "The Legend of Korra" artist Irene Koh, to bring each spooky tale to life." --New York Post

"The book is a thing of beauty, but the stories are filled with images of death and destruction. Knives and axes feature prominently. Decapitation and amputation abound. Eating but also being eaten. These are horror stories with recipes." --The Independent UK

"Structured as an old-fashioned Tales from the Crypt-style horror anthology, complete with a frame story and ghoulish host, the twist ... is that these offerings are all food-themed--and all variations on yarns from Kwaidan, Lafcadio Hearn's collection of traditional Japanese ghost lore. ..... Each piece is drawn by a different artist, including such comics luminaries as Vanesa Del Rey, Francesco Francavilla, and Paul Pope." -- Publishers Weekly

"An off-beat and very interesting read .... The artwork on the series ... [is] top notch and fascinating--a perfect combination of collaborators brought the stories to life across cultures." -- Comicon

Chef, author, and raconteur Anthony Bourdain is best known for traveling the globe on his TV show Anthony Bourdain: Parts Unknown. Somewhat notoriously, he has established himself as a professional gadfly, bête noir, advocate, social critic, and pork enthusiast, recognized for his caustic sense of humor worldwide. He is as unsparing of those things he hates, as he is evangelical about his passions.

Bourdain is the author of the New York Times bestselling Kitchen Confidential and Medium Raw; A Cook's Tour; the collection The Nasty Bits; the novels Bone in the Throat and Gone Bamboo; the biography Typhoid Mary: An Urban Historical; two graphic novels, Get Jiro! and Get Jiro!: Blood and Sushi and his latest New York Times bestselling cookbook Appetites. He has written for The New Yorker, The New York Times, The Times of London, Bon Appetit, Gourmet, Vanity Fair, Lucky Peach and many other publications. In 2013, Bourdain launched his own publishing line with Ecco, Anthony Bourdain Books, an imprint of HarperCollins. He is the host of the Emmy and Peabody Award-winning docuseries Anthony Bourdain: Parts Unknown on CNN, and before that hosted Emmy award-winning No Reservations and The Layover on Travel Channel, and The Taste on ABC.