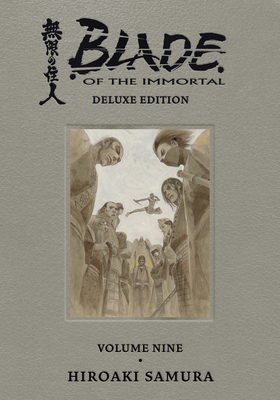 While Anotsu's strange crew of Itto-ryu are splintered and fatigued, Habaki Kagimura's group of suicidal Rokki-dan soldiers is hot on their heels.

Paths cross, swords clash, and all the pieces begin to fall into place for a ferocious final battle in this penultimate omnibus volume of Hiroaki Samura's spellbinding masterpiece.

Blade of the Immortal has won numerous awards across the globe, including the Eisner Award in America, the prestigious Media Arts Award of Japan, and multiple British Eagle Awards—among many other international accolades. Samura’s manga epic was made into a complete anime series in 2008 and was adapted into a live-action film by Takashi Miike in 2017.

Collects Blade of the Immortal volumes 26 to 28 in the original 7" x 10" serialized format, in a faux-leather hardcover treatment, and with a bookmark ribbon.

Hiroaki Samura is a Japanese writer/illustrator and creator of Blade of the Immortal, as well as several other short works. He has also done various illustrations for magazines.

“Samura's stark black-and-white drawings combine precision and a gritty, gestural line in riveting, powerfully expressive illustrations . . . Readers will be drawn into this epic tale, even when there are moments they would prefer to look away.”—Publishers Weekly

“Few artists draw samurai manga as well as Hiroaki Samura, whose pages are packed with photorealistic detail while remaining fluid, dynamic, and human.”—OtakuUSA