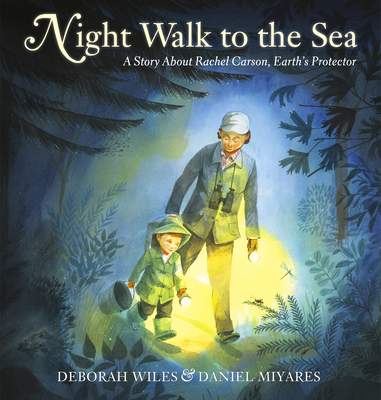 
Email or call for price.
This luminous picture book by an award-winning author and acclaimed illustrator is the perfect tool to discuss the importance of the natural world with young children, as well as introduce them to environmental activist Rachel Carson.

"I'm not afraid!" shouts Roger when he hears thunder outside...but he is afraid. When the storm quiets, his aunt Rachel decides to take him on a walk to see the beauty of the natural world at night. Over his Godzilla pj's goes his rain slicker; onto his feet go his monster boots, and together he and Rachel head down the rocky path to the sea. On the way they discover many marvels--a screech owl calling to its mate, ghost crabs tunneling in the sand, and most incredibly, the luminous life that lights up the water. When they find a tiny firefly who has lost its way, they bring it home and release it back into the woods. At last, Rachel tucks Roger into bed, telling him he is "nature's brave protector." An afterword introducing young readers to Rachel Carson, and explaining bioluminiscence, adds to the appeal of the book.
Deborah Wiles is the author of several highly acclaimed books, including two National Book Award finalists--Each Little Bird that Sings and Revolution. Her first picture book, Freedom Summer, received the Ezra Jack Keats New Writer Award. She is also an NAACP Book Award finalist, E.B. White Award winner, Golden Kite Award winner, Jane Addams Peace Award Finalist, and recipient of a PEN Phyllis Reynolds Naylor Working Writer Fellowship. Visit her on the web at deborahwiles.com or follow her on Twitter at @DeborahWiles101

Daniel Miyares is the illustrator of That is My Dream!, a picture book version of Langston Hughes's "Dream Variation," which received two starred reviews, and more recently, Night Out. Other picture books include Float, an ALA-ALSC Notable Children's Book of the Year, which The Boston Globe called "a perfect wordless picture book;" Pardon Me!, which PW declared "Follows in the footsteps of Jon Klassen"; and Surf's Up by Newbery Medalist Kwame Alexander. For his day job, he works at Hallmark Cards. Visit him on the Web at danielmiyares.com or follow him on Twitter at @danielmiyares.
Praise for Night Walk to the Sea:

“Lovely and lyrical…. The art—like the text—is magical” —Kirkus Reviews

“Miyares’ ink paintings render the deep night as mysterious and welcoming, a lush, velvety place where cozy closeness of the woods gives way to a majestic sea, with a pair of sturdy characters who move lightly through environments that they can appreciate but not fully own.” —The Bulletin

“[The] illustrations match the gentle tone of the story, with muted ink washes in blues and grays surrounding pops of yellow light from the lanterns and flashlights that illuminate every spread…. Back matter describes… the science behind bioluminescence.” —The Horn Book

“By relating one child’s encounters with awesome natural wonders, this quiet picture book lets others feel his satisfaction in saving a firefly and becoming a protector of nature.” —Booklist

Praise for Daniel Miyares' Night Out:

"There aren’t any lessons or morals—just the pleasure of watching a lonely boy find the friendship he wishes for." —Publishers Weekly, starred review

Praise for That is My Dream!:

"With luminous washes of watercolor and the lyrical language of Hughes’s 1924 poem as his text, Miyares (That Neighbor Kid) presents a resonant vision of an African-American boy who imagines a more just world." —Publishers Weekly, starred review