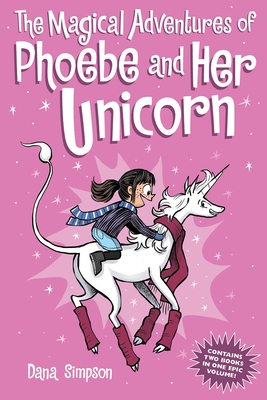 This special edition includes all the comics and bonus materials from Phoebe and Her Unicorn and Unicorn on a Roll, the first two books from the immensely popular and magical series for middle-grade readers.

What could be more magical than having a unicorn as a best friend? For nine-year-old Phoebe Howell, it all started while she was skipping rocks across a pond and accidentally hit a dazzling but self-absorbed unicorn named Marigold Heavenly Nostrils. Together, the unlikely BFFs discover a world full of magical mysteries and adventure, taking on everything from cruel classmates to candy-breathing dragons. These beautifully drawn comics show that even when life isn’t all rainbows and glitter, every day is magical with your best friend.

Dana Claire Simpson grew up in Gig Harbor, Washington, drawing the entire time. She eventually graduated from The Evergreen State College, despite having spent all her time drawing, and not always for credit.

From 1998 to 2008, she drew the internet comic strip Ozy and Millie. After winning the Amazon-sponsored Comic Strip Superstar Contest in 2009, Andrews McMeel Syndication signed her to a development deal for Heavenly Nostrils, which was later renamed Phoebe and Her Unicorn.

She currently lives in Santa Barbara, California, with her tech genius spouse and her fairly stupid cat.