The Astronomer Who Questioned Everything: The Story of Maria Mitchell (Hardcover) 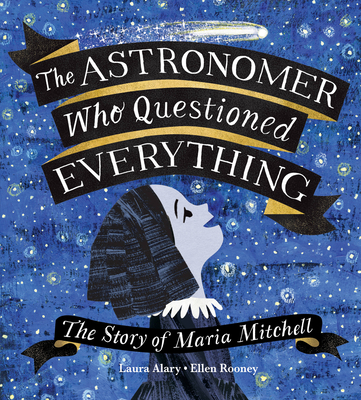 The Astronomer Who Questioned Everything: The Story of Maria Mitchell (Hardcover)

Maria longed to travel beyond her small island of Nantucket. But she wasn't sure how. Her father taught her to look to the stars for guidance. If you knew how to read them, he said, the stars could tell you where you were, and where you needed to go. They spent hours scanning the night sky together through a telescope on the roof. Maria learned how to use astronomers' tools to measure and track time by the stars. But what could she do with her skills? Then, one day, she heard that a prize was being offered to the first person to find a new comet. Could this be the opportunity she was waiting for?

This absorbing picture book biography by Laura Alary tells the fascinating, though not well-known, story of a remarkable nineteenth-century woman scientist and women's rights advocate. After winning that prize for discovering a comet, Maria Mitchell would go on to become the first professional female astronomer in the United States, first female member of the American Academy of Arts and Sciences, and one of the first female college professors. Beautifully illustrated with lovely textured artwork by Ellen Rooney, this is a well-told story with a teachable STEM component, supporting both science and social studies curriculums, that supports a growth mindset. It's also a wonderful guide sure to inspire readers to find their own way in the world. It includes backmatter that further describes Maria's impressive life and achievements.
Laura Alary believes in writing stories that make us bigger on the inside. She is constantly reading and wondering and learning so that she can keep up with all the questions her children ask --- especially about science and life on Earth. She grew up in Halifax, Nova Scotia, and currently lives in Toronto with her three children.
Ellen Rooney is an illustrator, designer and artist. She's originally from Massachusetts, but now lives in the southern Okanagan Valley in British Columbia. She loves graphic shapes, textured color, printmaking, drawing outdoors, painting --- and her hidden art powers are released when cutting up paper!
A warmhearted lesson in community and creative thinking, delivered simply.—Kirkus Reviews (Praise for What Grew in Larry's Garden)

An inspiring account of a notable early role model who pursued a STEM career despite sexism.—Kirkus Reviews

... a truly charming read that proves amazing things can grow in both our garden's and our lives when tended with human kindness and patience.—CM Magazine (Praise for What Grew in Larry's Garden)

Mitchell's story is well-told in this book. Whimsical mixed-media collage enhance the narrative of her life.—Children's Literature

... rich in detail and whimsy ... This title is a positive addition to a historical personage whose attitude is still a role model today.—Canadian Children's Book News