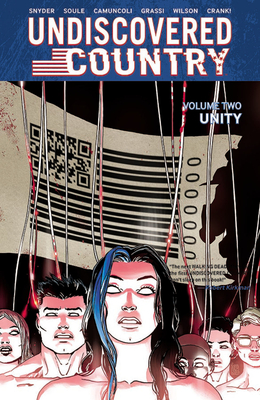 The smash hit series written by New York Times bestselling writers Scott Snyder (Wytches, AD: After Death) and Charles Soule (Curse Words, the forthcoming novel Anyone) with art by Giuseppe Camuncoli (The Amazing Spider-Man, Darth Vader, Hellblazer), newcomer Leonardo Marcello Grassi and Eisner-award winning colorist Matt Wilson (The Wicked and the Divine, Paper Girls) continues After barely escaping the deadly clutches of the Destiny Man, the expedition team has crossed over into the strange new zone of "Unity" -- a futuristic world of gleaming technology and artificial intelligence. But will it be a safe haven for our heroes, or are they destined to be absorbed into hive mind? Collects UNDISCOVERED COUNTRY #6-12