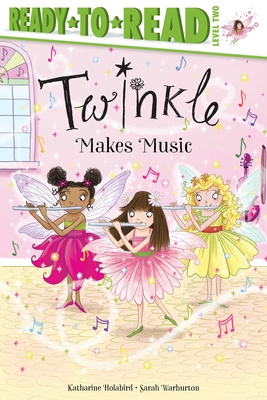 
On Our Shelves Now
The feisty fairy Twinkle makes music in this sixth Level 2 Ready-to-Read story about everyone’s favorite fairy from the acclaimed author of the beloved Angelina Ballerina series!

Fairy Godmother is throwing a party and she wants the students at The Fairy School of Magic and Music to play a song for all the guests. Twinkle, Pippa, and Lulu will each play the flute. But no matter how much she practices, Twinkle just can’t seem to play a note. Is there another way for Twinkle to make music?
Katharine Holabird grew up in a family of architects and artists in Chicago. As a child, she lived in an imaginary world of fairy tales, princesses, and ballerinas, and loved to perform and dance with her sisters. She wrote the first Angelina Ballerina at the kitchen table with her daughters twirling around her. Katharine has three grown children and three grandchildren, and now lives in New York City with her husband.

Sarah Warburton is an established artist whose books include Dinosaurs in the Supermarket (written by Timothy Knapman), The Princess and the Peas (written by Caryl Hart), and the Twinkle books (written by Katharine Holabird), as well as One Camel Called Doug, with author Lu Fraser. She has an uncanny ability to capture huge amounts of charm, humor, and detail in her work. She lives in Bristol, England.