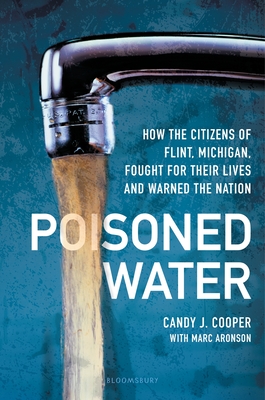 Based on original reporting by a Pulitzer Prize finalist and an industry veteran, the first book for young adults about the Flint water crisis
In 2014, Flint, Michigan, was a cash-strapped city that had been built up, then abandoned by General Motors. As part of a plan to save money, government officials decided that Flint would temporarily switch its water supply from Lake Huron to the Flint River. Within months, many residents broke out in rashes. Then it got worse: children stopped growing. Some people were hospitalized with mysterious illnesses; others died. Citizens of Flint protested that the water was dangerous. Despite what seemed so apparent from the murky, foul-smelling liquid pouring from the city’s faucets, officials refused to listen. They treated the people of Flint as the problem, not the water, which was actually poisoning thousands.
Through interviews with residents and intensive research into legal records and news accounts, journalist Candy J. Cooper, assisted by writer-editor Marc Aronson, reveals the true story of Flint. Poisoned Water shows not just how the crisis unfolded in 2014, but also the history of racism and segregation that led up to it, the beliefs and attitudes that fueled it, and how the people of Flint fought—and are still fighting—for clean water and healthy lives.

Candy J. Cooper is a Pulitzer Prize finalist and winner of the Selden Ring Award for Investigative Reporting. She has been a staff writer for four newspapers, including the Detroit Free Press and the San Francisco Examiner. Her work has appeared in the New York Times, the Columbia Journalism Review, and the Chronicle of Higher Education, among other publications. She is also the author of several books for classroom use. She lives in Montclair, New Jersey.

Marc Aronson earned his PhD in American history while beginning his career as an editor and author of books for children and teenagers. The first winner of the Robert L. Sibert medal from the American Library Association and the editor of the tenth winner, he is now a full-time faculty member at the Rutgers School of Communication and Information. He and his wife and sometimes coauthor, Marina Budhos, live in Maplewood, New Jersey.
marcaronson.com

“Flint citizens need fresh coverage that respects their activism rather than their victimhood. This becomes the controlling theme of this vivid account.” —BCCB