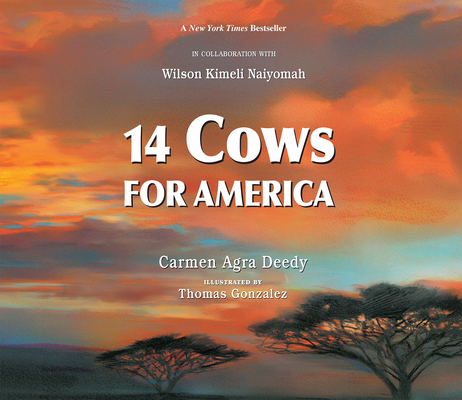 
Usually Ships in 1-5 Days
This New York Times bestseller recounts the true story of the touching gift bestowed on the US by the Maasai people in the wake of the September 11 attacks.

In June of 2002, a mere nine months since the September 11 attacks, a very unusual ceremony begins in a far-flung village in western Kenya. An American diplomat is surrounded by hundreds of Maasai people. A gift is about to be bestowed upon the American men, women, and children, and he is there to accept it. The gift is as unexpected as it is extraordinary.

Hearts are raw as these legendary Maasai warriors offer their gift to a grieving people half a world away. Word of the gift will travel newswires around the globe, and for the heartsick American nation, the gift of fourteen cows emerges from the choking dust and darkness as a soft light of hope―and friendship.

With stunning paintings from Thomas Gonzalez, master storyteller Carmen Agra Deedy (in collaboration with Naiyomah) hits all the right notes in this elegant story of generosity that crosses boundaries, nations, and cultures.
Carmen Agra Deedy is a New York Times best-selling author and renowned storyteller. Her books have received numerous awards and honors. Carmen has performed in many prestigious venues, but children are her favorite audience. Born in Havana, Cuba, she came to the United States as a refugee and like most immigrants sees the world from multiple perspectives. She lives in Georgia.

Thomas Gonzalez is an illustrator, designer, and portrait artist. A native of Cuba, he came to the United States when he was ten years old. He studied at the Atlanta School of Art (now called Savannah of Art and Design). After working at the Coca-Cola Company for more than twenty years, Tom held several creative positions with other global brands. He has illustrated many picture books, including the New York Times best-seller 14 Cows for America. He lives in Georgia.

Wilson Kimeli Naiyomah received his Master of Science degree in molecular biology from Stanford University in 2008. He was awarded a Rotary International World Peace Fellowship and completed studies in international development policy at Duke University. He lives in California.
★ "Elegant sentences. . . The suspenseful pace is especially striking when surrounded by Gonzalez's exquisite colored pencil and pastel illustrations. The colors of Kenya explode off the page." —School Library Journal, Starred Review

"A stirring, heartwarming tale that made headlines when it happened – and is now, thankfully, preserved on the page for children." —Kirkus Reviews

"A moving tale of compassion and generosity."—Publishers Weekly