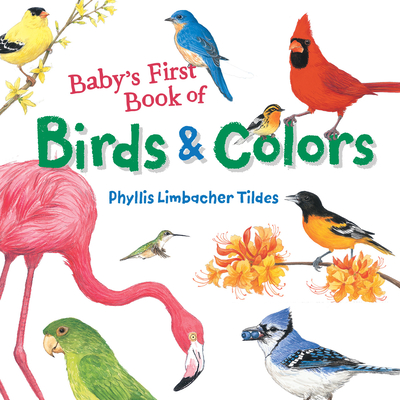 The colorful world of birds! Birds come in all different shapes, sizes, and yes, colors, too!

From the eastern bluebird and blue jay to the scarlet tanager and northern cardinal, little ones will discover the natural world and learn the names and colors of Phyllis Limbacher Tildes’s exquisitely illustrated birds in their natural habitats. The color word appears large and bold, and each bird is labeled by name, as are ﬂowers, fruits, and foliage. Each bird is color coded and has a name and gender for children to easily identify.

Phyllis Limbacher Tildes is the author and illustrator of many books for children, including Baby Animals Day & Night, Baby Animals Spots & Stripes, and Baby Animals Black and White. She lives in Savannah, Georgia. Phyllis has worked as a designer for Hallmark and was the assistant art director for Hopkins Art Center at Dartmouth College after her graduation from RISD. She was a freelance graphic designer for over twenty-five years, doing everything from logos to opera and ballet promotion pieces.
She never lost sight of her original dream of becoming an author/illustrator, however, and in 1995 her first children's book, Counting on Calico, was published. Since then she has published several other stories ranging from pets and wildlife to ethnic tales.

Tildes (Baby Animals Take a Bath) pairs nine colors (if one counts black and white) with birds that show off each hue. The birds are labeled by name and sex, and they perch in and around foliage that helps make the pages explode with color: an eastern bluebird sits on a birdhouse entwined with morning glories, a thrush and wren scavenge for food on a forest floor dotted with brown leaves and mushrooms, and a downy woodpecker does its thing on a birch's flaky white bark. As she often does, Tildes concludes the book with a spread featuring human children, though it feels overly posed and visually jarring beside the preceding pages.
—Publishers Weekly

Gorgeous birds amid foliage of similar hues introduce eight basic colors. The two birds presented on each spread not only are of similar coloration, but also live in the same North American habitat. A scarlet tanager and a cardinal, both male, perch in a red maple tree; a male Eastern bluebird and a blue jay appear with morning glories and blueberries. The name of each color is printed in large font, while the name of each bird is in a much smaller one. Whether the bird shown is male or female, or if the male and female have similar coloring, is also indicated. The names of the trees they perch upon are identified in a note on the back cover. These details will be lost on most toddlers, but caregivers will appreciate being able to answer questions knowledgeably. Colors featured are from the standard box of crayons, except that pink is substituted for purple. Black and white share a spread. The cover image, of a cardinal, goldfinch, and bluebird in a birdbath, is not nearly as inviting as the images within. The final spread shows children (one white, one black, one Asian) assembling a puzzle that includes the same birds. This may serve as a reprise but will probably be skipped over. Bird-loving readers will probably feel that the space could have been put to better use by giving white birds their own page or adding a purple martin. Useful for toddling birders in need of board books about colors.
—Kirkus Reviews

This handsome board book presents both birds and colors beautifully. The first seven double-page spreads introduce red, orange, yellow, green, blue, pink, and brown, while the eighth features black and white. Each color is represented by two simplified, lifelike paintings of birds in natural settings, with identifiers such as "scarlet tanager / male" and "Carolina wren / male or female." The last spread shows three children of different ethnicities putting together a bird puzzle. The pleasing artwork reinforces the colors through elements such as forsythia in bloom and red maple leaves. A vibrant introduction to birds, this volume includes color identification, too.
—Booklist