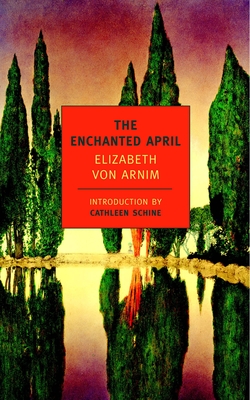 By Elizabeth von Arnim, Cathleen Schine (Introduction by)
$18.65
Email or call for price.

A recipe for happiness: four women, one medieval Italian castle, plenty of wisteria, and solitude as needed.

The women at the center of The Enchanted April are alike only in their dissatisfaction with their everyday lives. They find each other—and the castle of their dreams—through a classified ad in a London newspaper one rainy February afternoon. The ladies expect a pleasant holiday, but they don’t anticipate that the month they spend in Portofino will reintroduce them to their true natures and reacquaint them with joy. Now, if the same transformation can be worked on their husbands and lovers, the enchantment will be complete.

The Enchanted April was a best-seller in both England and the United States, where it was a Book-of-the-Month Club selection, and set off a craze for tourism to Portofino. More recently, the novel has been the inspiration for a major film and a Broadway play.

Elizabeth von Arnim (1866—1941) was born Mary Annette Beauchamp in Sydney, Australia. Her first book, the autobiographical novel Elizabeth and Her German Garden–inspired by the grounds of the estate she shared with her husband, Count Henning August von Arnim–was an enormous success. After the death of her first husband, Elizabeth married Francis the second Earl Russell, brother of Bertrand Russell. It was a disastrous marriage and the two eventually separated. Von Arnim moved to the US at the start of World War II, and spent her final years there.

Cathleen Schine has received wide acclaim for her five previous novels: Alice in Bed, To the Birdhouse, The Evolution of Jane, and the international bestsellers Rameau's Niece and The Love Letter, both of which were made into feature films. She lives in New York City.

"A pleasant...little story, with some neat phrasing and a genuine feeling for color and for beauty."--The New York Times

"The Enchanted April sounds as if it would be an appallingly cloying cream puff of a fairy tale, but that would be to ignore that the author habitually kept a pot of lemon juice mixed with vinegar beside her ink-pot. With this bracing element there is additionally what can only be called a feast of flowers, hanging from every wall and pouring scent over the company."--Times Literary Supplement

"[A]n expression of the propensity of people to be blind to the real secret of happiness, and that it showed how exquisitely men and women get upon each others' nerves and how they suffer from each others' egos."--National Review

"[A] restful, funny, sumptuous, and invigorating vacation for the mind and soul." --500 Great Books By Women

A particular kind of witty and well-constructed fiction, a sort of sparkling Euclid, which nobody else can touch.
— Rebecca West