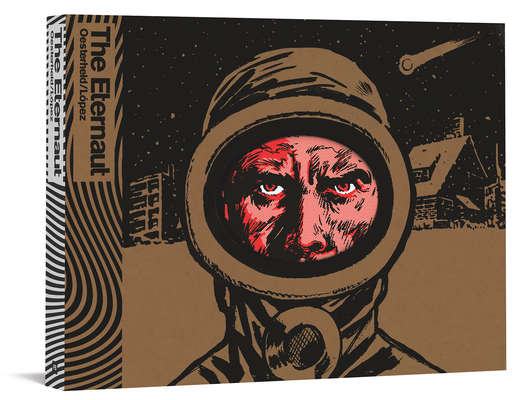 This originally appeared as weekly installments from 1957-59. Juan Salvo, the inimitable protagonist, along with his friend Professor Favalli and the tenacious metal-worker Franco, face what appears to be a nuclear accident, but quickly turns out to be something much bigger than they had imagined. Cold War tensions, aliens of all sizes, space—and time travel—this one has it all.

Héctor Germán Oesterheld (HGO) (born July 23, 1919; "disappeared" by the military and presumed dead 1977), was a pioneering Argentine graphic novel and comics writer. Notable works include his science-fiction series El Eternauta, as well as Life of Che, a biography of Che Guevara.

In Argentina, The Eternaut is a cultural milestone ... López draws the massive adventure in a sharp-edged, high-contrast, varyingly detailed manner... [A] fascinating and exciting work.
— Ray Olson - Booklist

A sense of hope underlies the series, and it can be read as the struggle of the everyman to shirk off the yoke of oppression and to circumvent the cycle of slavery that war begets.
— Shea Hennum - Paste

...The Eternaut is a particularly compelling work, and it occupies an interesting point in Latin American literature. ... In much the same way that Tarantino spins poetry from trash cinema, Oesterheld constructs a political allegory out of sci-fi serials and adventure novels. ...[I]ts apocalyptic lens facilitates its argument that anything can be overcome by unity, by refusing to accept oppression; it is, at the end of the day, a paean to the human spirit.

Oesterheld and López’s Argentinian classic from the 1950s [is] newly translated by Mena with a deftness and energy befitting the Borgesian, literary quality of the narrative... Elsewhere, López’s vigorous and occasionally terrifying drawings bring us from one hair-raising moment to the next, one part R. Crumb, one part Goya, one part Edvard Munch. ... These two stories, of course, point to a larger one: that of how we deal with the daily catastrophes and pitfalls of human existence, with or without extraterrestrials.
— Max Winter - The Boston Globe

...[T]here is more to [this] brilliant comic than meets the eye. It is at once both science fiction and political allegory. But fear not. Although Fantagraphics’ magnificently luxurious edition comes with all the necessary historical information, you need know nothing of Peronism to enjoy it. This is one of the most exciting comics you’ll ever read.
— Rachel Cooke - The Guardian

...[The Eternaut is] one of the pillars of South American comics…

The Eternaut may just be the most interesting graphic novel of the season. ...[M]ore than just a rollicking science fiction story, [The Eternaut] is a national saga for the fight for freedom from repressive government... And it’s gorgeous.

[The Eternaut] is considered one of the greats of Argentinian comics and one of the great genre books ever, period... and to have a fancy version of it available for libraries and readers is a dream come true.

...I’m absolutely enamored that Fantagraphics was able to finally get this graphic novel published in English. Two of the most radical creators in Buenos Aires have a breadth of inspirational and beautiful work that has long been unrecognized to the modern audience. This is some of my favorite kind of science fiction -- political allegory and teeming realism coupled with the absurd, limitless boundaries of space, time, and science.
— Roderick Ruth - Comicosity