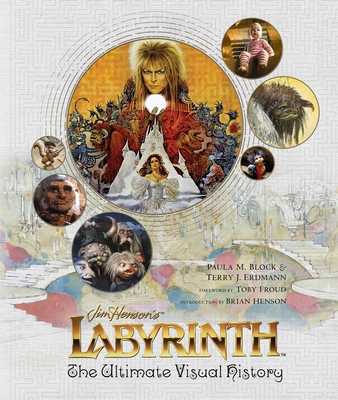 Journey back to Jim Henson's Labyrinth in this visually stunning celebration of the enchanting fantasy classic.

Three decades after its release, Labyrinth, starring David Bowie and Jennifer Connelly, continues to enthrall audiences with its winning mixture of fairy-tale magic, fantastical creatures, and unforgettable music. Filled with a wealth of rare and unseen behind-the-scenes imagery, this book explores the creation of the film as seen through the eyes of the artists, costume designers, and creature creators who gave Labyrinth its distinctive look. Featuring in-depth commentary from the talented crew and cast—including exclusive new interviews with Jennifer Connelly, Brian Henson, Brian Froud, and George Lucas—this deluxe book brings together a wealth of rare sketches, concept art, and candid set photography to form and incredible treasure trove for Labyrinth fans. With stunning visuals and unparalleled insight into the creation of a true modern classic, Labyrinth: The Ultimate Visual History is the perfect companion piece to one of the best-loved fantasy films of all time.

Paula M. Block is the coauthor of the novella Star Trek: Deep Space Nine—Lust’s Latinum Lost and numerous nonfiction books about the entertainment industry, including Star Trek: The Original Series 365, Star Trek 101, Monk: The Official Episode Guide, The 4400 Companion, Star Trek: Deep Space Nine Companion, The Secrets of Star Trek Insurrection, Star Trek: Action!, and The Magic of Tribbles. She is also the coeditor of Pocket Books’ popular short story series Star Trek: Strange New Worlds. She has been a columnist for the Chicago Sun-Times, the Midwest correspondent for Biotechnology Newswatch, and the international editor for Chemical Week. After nineteen years overseeing and editing licensed publishing for Paramount Pictures and CBS Television, Paula moved to Southern Oregon, where she and her husband, author Terry J. Erdmann, write a monthly entertainment column for The Jacksonville Review.

Terry J. Erdmann is the coauthor of the novella Star Trek: Deep Space Nine—Lust’s Latinum Lost and numerous nonfiction books about the entertainment industry, including Star Trek: The Original Series 365, Star Trek 101, Monk: The Official Episode Guide, The Last Samurai Official Companion, Star Trek: Deep Space Nine Companion, The Secrets of Star Trek Insurrection, The Magic of Tribbles, The Tribble Handbook, Star Trek: Action!, and The 4400 Companion. As a motion picture publicist, he helped to create the marketing campaigns for dozens of films, from Cocoon, Aliens, and Willow, to What’s Love Got to Do With It, Father of the Bride Part II, G.I. Jane, and Star Trek V: The Final Frontier. He lives in Southern Oregon, where he and his wife, author Paula M. Block, write a monthly entertainment column for The Jacksonville Review.

Toby Froud is a puppet designer and fabricator. He began his life as Baby Toby in the film Labyrinth and is currently a puppet sculptor at the stop-motion company Laika, where he has worked on ParaNorman, The Boxtrolls, and Kubo and the Two Strings. He lives in Portland, Oregon, with his wife and son.

Brian Henson is Chairman of The Jim Henson Company and an Oscar and Emmy Award-winning technological innovator. He is also an award-winning director, producer, writer and puppeteer for film and television. He lives in Southern California.

“This is a truly behind- and in-the-scenes look at a film that has maintained a pull on audiences for decades. With sketches, interviews with cast and crew and thorough research, Block and Erdmann explore the genesis of the film, its script, its puppets, the ins and outs of its filming, and the ups and downs of its reception. It's at once dazzling and engrossing.”