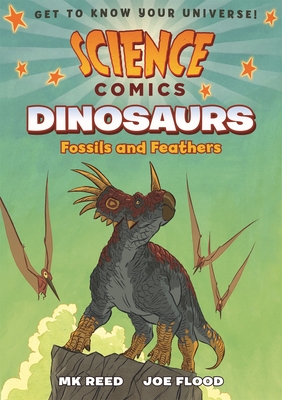 Every volume of Science Comics offers a complete introduction to a particular topic--dinosaurs, coral reefs, the solar system, volcanoes, bats, flying machines, and more. These gorgeously illustrated graphic novels offer wildly entertaining views of their subjects. Whether you're a fourth grader doing a natural science unit at school or a thirty-year-old with a secret passion for airplanes, these books are for you!

This volume: in Dinosaurs, learn all about the history of paleontology! This fascinating look at dinosaur science covers the last 150 years of dinosaur hunting, and illuminates how our ideas about dinosaurs have changed--and continue to change.

MK Reed is the writer of Americus, The Cute Girl Network, Palefire, and the Eisner-nominated Science Comics: Dinosaurs. She writes and draws About a Bull, a web-comic adaptation of Irish mythology. MK lives in Portland, Oregon, with her very tall husband.

Joe Flood is a comic book author and illustrator whose work includes Cellies, Pirates of the Caribbean and Orcs: Forged for War. For the Science Comics series, he collaborated on Dinosaurs: Fossils and Feathers with MK Reed and wrote and illustrated Sharks: Nature’s Perfect Hunter. He lives with his wife and daughter in New York’s Hudson Valley.

Praise for the Science Comics series:

"This series—written by a handful of authors—seems determined to offer a useful introduction to anything a curious grade-school student might wonder about. The insight behind these books is a powerful one. So much information about the world around us is actually better conveyed visually, through charts, illustrations, and sequential panels, than purely using words." —New York Times

"Like having a Time Life Science Library in comic books. Which is awesome!" —Popular Science

"The artwork and text are attractive and interesting, and readers will learn how dinosaur bones became fossils and how their remains were eventually discovered. Great entry-level texts that will spark readers’ interest in these topics." —School Library Journal