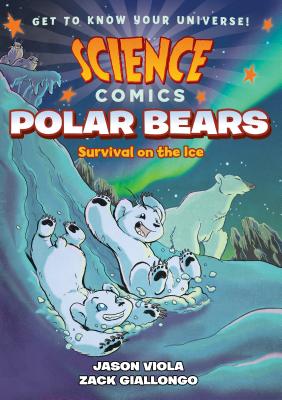 Head out to the Arctic and learn about polar bears in this volume of Science Comics, Survival on the Ice, an action-packed nonfiction graphic novel series for middle-grade readers!

Do you have what it takes to live in one of the harshest places in the world? What if you had just a couple years to gain the knowledge you'll need to survive on your own? Join two curious polar bear cubs as they play, hunt, and navigate life in the Arctic. With each season, they learn polar bear biology and behavior, as well as strategies and skills that will help them thrive in a landscape that is rapidly changing beyond their control. Living with super insulated bodies in a world that's melting? For polar bears, keeping cool is the name of the game!

Get ready to explore the depths of the ocean, the farthest reaches of space, and everything in between! These gorgeously illustrated graphic novels offer wildly entertaining views of their subjects. Whether you're a fourth grader doing a natural science unit at school or a thirty-year-old with a secret passion for airplanes, Science Comics is for you!

Zack Giallongo is a professional cartoonist, cheese enthusiast, and amateur banjo-ist. His first solo graphic novel, Broxo, is about teenage barbarians and was published in 2012. It hit #4 on the New York Times Bestsellers list.

Jason Viola grew up in small farm town in Massachusetts where he spent idle hours drawing comic strips about birds and cats. While his father's affinity for woodworking and storytelling encouraged his creativity, his mother managed a menagerie of pets which spurred an interest in animals that continues today. Continuing to find inspiration from biology and through the lens of pop culture, he has written about manatees, amoebas, and flowers with a modern, satiric twist. He's also written essays and reviews on independent comics, putting special emphasis on work that is often overlooked. Jason went to college in Buffalo, NY, where he met his wife Rebecca. They both help organize a Boston-area comics convention called MICE, and enjoy hiking together through the Middlesex Fells.

Jason is the co-author of Science Comics: Polar Bears.

Praise for the Science Comics series:

"This series—written by a handful of authors—seems determined to offer a useful introduction to anything a curious grade-school student might wonder about. The insight behind these books is a powerful one. So much information about the world around us is actually better conveyed visually, through charts, illustrations, and sequential panels, than purely using words." —New York Times

"Like having a Time Life Science Library in comic books. Which is awesome!" —Popular Science