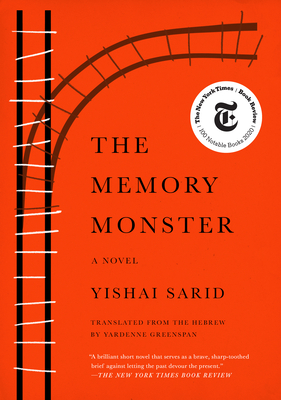 "A brilliant short novel that serves as a brave, sharp-toothed brief against letting the past devour the present" (The New York Times Book Review Editors' Choice), Yishai Sarid's The Memory Monster is a harrowing parable of a young historian who becomes consumed by the memory of the Holocaust.

Written as a report to the chairman of Yad Vashem, Israel's memorial to the victims of the Holocaust, our unnamed narrator recounts his own undoing. Hired as a promising young historian, he soon becomes a leading expert on Nazi methods of extermination at concentration camps in Poland during World War II and guides tours through the sites for students and visiting dignitaries. He hungrily devours every detail of life and death in the camps and takes pride in being able to recreate for his audience the excruciating last moments of the victims' lives.

The job becomes a mission, and then an obsession. Spending so much time immersed in death, his connections with the living begin to deteriorate. He resents the students lost in their iPhones, singing sentimental songs, not expressing sufficient outrage at the genocide committed by the Nazis. In fact, he even begins to detect, in the students as well as himself, a hint of admiration for the murderers--their efficiency, audacity, and determination. Force is the only way to resist force, he comes to think, and one must be prepared to kill.

With the perspicuity of Kafka's The Trial and the obsessions of Delillo's White Noise, The Memory Monster confronts difficult questions that are all too relevant to Israel and the world today: How do we process human brutality? What makes us choose sides in conflict? And how do we honor the memory of horror without becoming consumed by it?

About the Author: Yishai Sarid was born and raised in Tel Aviv, Israel in 1965. He is the son of senior politician and journalist Yossi Sarid. Between 1974-1977, he lived with his family in the northern town of Kiryat Shmona, near the Lebanon border. Sarid was recruited to Israeli Army in 1983 and served for five years. During his service, he finished the IDF's officers school and served as an intelligence officer. He studied law at the Hebrew University of Jerusalem. During 1994-1997, he worked for the Government as an Assistant District Attorney in Tel-Aviv, prosecuting criminal cases. Sarid has a Public Administration Master's Degree (MPA) from the Kennedy School of Government at Harvard University (1999). Nowadays he is an active lawyer and arbitrator, practicing mainly civil and administrative law. His law office is located in Tel-Aviv. Alongside his legal career, Sarid writes literature, and so far he has published six novels. His novels have been translated into ten languages and have won literary prizes. Sarid is married to Dr. Racheli Sion-Sarid, a critical care pediatrician, and they have three children.About the Translator: Yardenne Greenspan is a writer and Hebrew translator. Her translations have been published by Restless Books, St. Martin's Press, Akashic, Syracuse University, New Vessel Press, and Amazon Crossing, and are forthcoming from Farrar, Straus & Giroux. Yardenne's writing and translations have appeared in The New Yorker, Haaretz, Guernica, Literary Hub, Blunderbuss, Apogee, The Massachusetts Review, Asymptote, and Words Without Borders, among other publications. She has an MFA from Columbia University and is a regular contributor to Ploughshares.