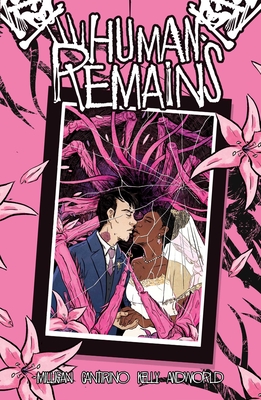 Alien meets A Quiet Place in this science fiction tale of terror for fans of Josh Malerman’s Bird Box and Tim Lebbon’s The Silence about a post-apocalyptic world in which monsters hunt the things that make us human – where feeling is a dangerous thing.

Live. Laugh. Love. Scream.
DIE.
Dax and Bisa love each other. But in this new and terrifying world, love is dangerous. Feeling anything is dangerous. Love. Hate. Joy. Fear.  Any of these in strong doses will bring a swift death. Earth has a new and terrible invader—monsters that smell the scent of emotion, salivate over the prey, and hunt the very feelings that make us human. A shocking tale of pent-up emotions and forced composure in the face of unspeakable horror…from one of the most celebrated writers in comics, Peter Milligan (X-Force, Enigma, Shade the Changing Man, Hellblazer) and breakout horror artist Sally Cantirino (I Walk With Monsters, The Final Girls).

"Human Remains might be the scariest Vault series to date." – Gate Crashers

“a brutal, visceral, soul crushing world where the barest hint of emotion can lead to a violent and bloody death.”  - Multiversity Comics

Peter Milligan is a legendary British writer of comics, film, and television. One of Entertainment Weekly’s “it” writers of the early 2000s, Peter Milligan was at the forefront of the revolution in comics which were created for a more sophisticated, adult audience. Shade the Changing Man for Vertigo offered a skewered look at American culture, while Enigma, Face, The Extremist, and Rogan Gosh pushed the boundaries of what comic books could do. Milligan was the longest-running writer of the cult horror comic Hellblazer, and his take on Human Target inspired the TV series. For Marvel, the hugely-popular X-Statix was a radical reworking of the X-Man paradigm, described by Kevin Smith (CLERKS etc) as “the most well-observed scholarly analysis of media-manipulation filtered through a pop-culture lens ever committed to the page”.

Sally Cantirino is a comic artist and illustrator currently based in New Jersey. She has been self-publishing comics and zines since she was a teenager. Her recent comics work includes I Walk With Monsters and Human Remains for Vault Comics,  “The Final Girls”, “Last Song”, and “We Have To Go Back”. She has also done artwork for World Champ Game Co and bands like La Dispute and Murder By Death.

"I read this at a gasp, horrifed by the bloody events as much as the too-familiar feel of a society self-destructing--even before the monsters come. A palpitating whirlwind of a start."
— Daniel Kraus (New York Times bestselling author of The Shape of Water, Trollhunters,The Teddies Saga, and Vault Comics' The Autumnal)

"As brilliant and incisive as ever, Peter Milligan questions what makes us human, and what motivates us to make the terrible decisions we inevitably make.”
— Kieron Gillan

"Human Remains might be the scariest Vault series to date."
— Gate Crashers