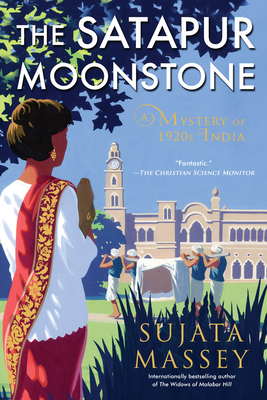 The highly anticipated follow-up to the critically acclaimed novel The Widows of Malabar Hill.

India, 1922: It is rainy season in the lush, remote Sahyadri mountains, where the princely state of Satapur is tucked away. A curse seems to have fallen upon Satapur’s royal family, whose maharaja died of a sudden illness shortly before his teenage son was struck down in a tragic hunting accident. The state is now ruled by an agent of the British Raj on behalf of Satapur’s two maharanis, the dowager queen and her daughter-in-law.

The royal ladies are in a dispute over the education of the young crown prince, and a lawyer’s counsel is required. However, the maharanis live in purdah and do not speak to men. Just one person can help them: Perveen Mistry, Bombay’s only female lawyer. Perveen is determined to bring peace to the royal house and make a sound recommendation for the young prince’s future, but she arrives to find that the Satapur palace is full of cold-blooded power plays and ancient vendettas. Too late, she realizes she has walked into a trap. But whose? And how can she protect the royal children from the palace’s deadly curse?
Sujata Massey was born in England to parents from India and Germany, grew up in St. Paul, Minnesota, and lives in Baltimore, Maryland. She was a features reporter for the Baltimore Evening Sun before becoming a full-time novelist. The first Perveen Mistry novel, The Widows of Malabar Hill, was an international bestseller and won the Agatha, Macavity, and Mary Higgins Clark Awards. Visit her website at sujatamassey.com.
Finalist for the 2020 Sue Grafton Memorial Award
Winner of the Lefty Award for Best Historical Mystery Novel 2020
Finalist for the 2020 Sue Feder Memorial Award for Best Historical Mystery
The Baltimore Sun's Best Author of 2019
An Amazon Best Book of the Month for May 2019
A Book Riot Read or Dead Most Anticipated Mystery Novel of 2019
A CrimeReads Most Anticipated Crime & Mystery Novel of 2019
A CrimeReads Best Historical Crime Novel of 2019
A BookBub Most Anticipated Mystery Novel of 2019
A Goodreads Most Anticipated Mysteries and Thrillers of Spring

Praise for The Satapur Moonstone

“Bright, determined . . . Perveen, whose aim is to help women and children, continues to engage us, thereby ensuring a long-running series.”
—The Seattle Times

“One of my new favorite historical mystery series is written by Sujata Massey and centers on Perveen Mistry, the only female lawyer in Bombay and one of the first women to practice law in India . . . I recommend this series to fans of the Maisie Dobbs series by Jacqueline Winspear.”
—The News-Review

“This sequel is as lovely as the first . . . Perveen uncovers ‘a mysterious affair’ involving the death of a dowager, the kidnapping of a maharaja, a missing moonstone, and her own closed-off heart.”
—Carole E. Barrowman, Milwaukee Journal-Sentinel

“One of my favorite books of the year.”
—Ellery Queen Mystery Magazine

“A meticulous engagement with another era, and another country, whose conflicts of power reverberate into the contemporary.”
—Alfred Hitchcock Mystery Magazine

“A gloriously descriptive, imaginatively plotted and thrillingly concluded tale. Ms. Massey has created a majestic evocation of the period and has another captivating success.”
—Shots Magazine

“[Massey] builds the suspense while weaving a more complicated narrative arc than a traditional whodunit.”
—Rewire.News

“Once again Massey does a superb job of combining a fascinating snapshot into 1920s British-ruled India with a top-notch mystery. She has created a strong, appealing heroine who is forging her own path in a rapidly changing world.”
—Library Journal, Starred Review

“Simply put, The Satapur Moonstone is a flawless gem. Historical mysteries don’t get any better than this.”
—New York Journal of Books

“It is Perveen herself that makes this series such delightful reading. She is rendered with great humanness as a caring, generous role model . . . The author provides a rich representation of the world in which Perveen lives and works. Bombay in the 1920s, the Parsi community, and the recurring and familiar lovable characters all combine to give the reader a complete and enduring experience.”
—India Currents

“Brillaintly penned . . . The Satapur Moonstone can easily have a Bollywood version and I will not be surprised if it becomes a Box Office topper!”
—Gaysi

“Massey is as deft at conjuring rainy jungles and isolated palaces as she was at bringing cosmopolitan Bombay to life in The Widows of Malabar Hill. It is this wealth of detail and research that make the books stand out, along with Perveen’s endearing and forthright spirit.”
—NW Book Lovers

“Perveen is back, this is not a drill!”
—Novel Suspects

“[The Satapur Moonstone] has the most delicious sense of suspense. It's not necessary to read The Widows of Malabar Hill before undertaking The Satapur Moonstone, but why deny yourself the pleasure of experiencing two excellent novels? Needless to say, I am eagerly awaiting the third book!”
—Kittling Books

Praise for The Widows of Malabar Hill

“The Widows of Malabar Hill, with its deft prose and well-wrought characters, is a splendid first installment in what promises to be a memorable series.”
—The Wall Street Journal

“Marvelously plotted, richly detailed . . . This is a first-rate performance inaugurating a most promising series.”
—The Washington Post

“Perveen Mistry has all the pluck you want in a sleuthing lawyer, as well as a not-so-surprising—but decidedly welcome—proclivity for poking her nose into the business of others. The pages do indeed fly.”
—The Globe and Mail