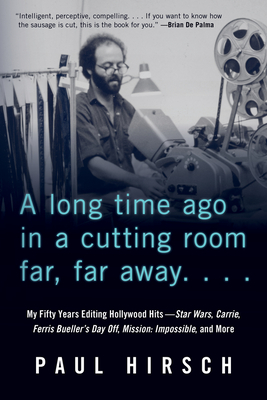 "For its sheer excellence, diversity, and cultural impact, Paul Hirsch's filmography speaks for itself. They say a film is made in the editing room, and this book is easily the most comprehensive, revelatory, and illuminating account of this essential cinematic art. A must-read for both the casual moviegoer and the serious cinephile alike." —Mark Hamill

A Long Time Ago in a Cutting Room Far, Far Away provides a behind-the-scenes look at some of the most influential films of the last fifty years as seen through the eyes of Paul Hirsch, the Oscar-winning film editor who worked on such classics as George Lucas’s Star Wars and The Empire Strikes Back, Brian De Palma’s Carrie and Mission: Impossible, Herbert Ross’s Footloose and Steel Magnolias, John Hughes’s Ferris Bueller’s Day Off and Planes, Trains & Automobiles, Joel Schumacher’s Falling Down, and Taylor Hackford’s Ray.

Hirsch breaks down his career movie by movie, offering a riveting look at the decisions that went into creating some of cinema’s most iconic scenes. He also provides behind-the-scenes insight into casting, directing, and scoring and intimate portraits of directors, producers, composers, and stars.

Paul Hirsch received the Academy Award for his editing work on Star Wars in 1978. He also has edited The Empire Strikes Back, Carrie, Mission: Impossible, Footloose, Steel Magnolias, Ferris Bueller's Day Off, and Falling Down. In 2005, he received his second Academy Award nomination for Ray. He lives in Los Angeles, California.

"Paul Hirsch, a master of his craft, has written an intelligent, perceptive, compelling memoir of his editing life, from the late '60s through today. From the heights of Star Wars to the depths of Pluto Nash, if you want to know how the sausage is cut, this is the book for you. I should know, I was with him in the beginning and through our misadventure to Mars. Congratulations, Paul, for remembering all the things we forgot." —Brian De Palma

"It shouldn’t be surprising that a great storyteller can tell great stories. From the man in the (cutting) room where it happened on many of our favorite films comes a glorious piece of work that makes you feel that you were there yourself. How do I feel about this book? Not ‘ipsy-pipsy.’ If you want to decipher that, read it!" —J.J. Abrams

"Paul’s written a terrific expert’s view of the editing process, which I believe will be an important technical and historical narrative for future filmmakers and film lovers." —Taylor Hackford

"Storyteller and showman, film editor Paul Hirsch narrates the ups and downs of his fifty-year career on the jungle gym of cinema with fascinating inside-the-boiler-room tales of how classic hits and flops were constructed—and deconstructed. Jaw-dropping tales of working with George Lucas on Star Wars and The Empire Strikes Back and on eleven Brian De Palma films (Carrie, Phantom of the Paradise, etc.). Paul's invaluable tips and insights, hard won through experience, will brilliantly illuminate the creative process for aspiring filmmakers and enthusiasts alike." —Walter Murch

"For its sheer excellence, diversity, and cultural impact, Paul Hirsch's filmography speaks for itself. They say a film is made in the editing room, and this book is easily the most comprehensive, revelatory, and illuminating account of this essential cinematic art. A must-read for both the casual moviegoer and the serious cinephile alike." —Mark Hamill

"The stories and insights from a veteran editor will appeal to cinephiles and anyone looking to learn more about the craft." —Booklist

"a treasure...Hirsch takes readers on a journey through his extraordinary career with a writing style that is clear, entertaining, and rollicking."— American Cinema Editors (ACE) Magazine