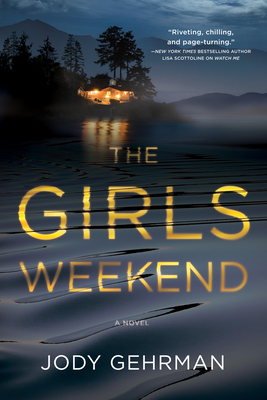 For fans of Ruth Ware and Lucy Foley, a riveting locked-room mystery about five college friends eager to reunite after years apart--only to be ripped apart again when their host's disappearance unearths dark secrets and old grudges.

June Moody, a thirty-something English professor, just wants to get away from her recent breakup and reunite with girlfriends over summer break. Her old friend and longtime nemesis, Sadie MacTavish, a mega-successful author, invites June and her college friends to a baby shower at her sprawling estate in the San Juan Islands. June is less than thrilled to spend time with Sadie--and her husband, June's former crush--but agrees to go.

The party gets off to a shaky start when old grudges resurface, but when they wake the next morning, they find something worse: Sadie is missing, the house is in shambles, and bloodstains mar the staircase. None of them has any memory of the night before; they wonder if they were drugged. Everyone's a suspect. Since June had a secret rendezvous with Sadie's husband, she has plenty of reason to suspect herself. Apparently, so do the cops.

A Celtic knot of suspense and surprise, this brooding, atmospheric novel will keep you guessing as each twist reveals a new possibility. It will remind you of friendships hidden in the depths of your own past, and make you wonder how well you really know the people you've loved the longest.

Jody Gehrman has authored several novels and numerous plays for stage and screen. Her young-adult novel, Babe in Boyland, won the International Reading Association's Teen Choice Award and was optioned by the Disney Channel. Jody's plays have been produced or had staged readings in Ashland, New York, San Francisco, Chicago and L.A. Her full-length, Tribal Life in America, won the Ebell Playwrights Prize and received a staged reading at the historic Ebell Theater in Los Angeles. She and her partner David Wolf won the New Generation Playwrights Award for their one-act, Jake Savage, Jungle P.I. She holds a Masters Degree in Professional Writing from the University of Southern California and is a professor of Communications at Mendocino College in Northern California.

Praise for The Girls Weekend:
“A brooding meditation on how friendships buckle when we resent other people’s success.”
—The Washington Post

"Gehrman's writing style and characters...[are]nuanced and had a depth to them...I highly recommend this."
—Seattle Book Review

“A Celtic knot of suspense and surprise, this brooding, atmospheric novel will keep you guessing as each twist reveals a new possibility.”
—Red Carpet Crash

"[An] exhilarating, atmospheric thriller exploring the darker side of friendship...dazzling prose and an eerily beautiful setting."
—Megan Collins, author of The Winter Sister

"A pulse-pounding thriller...you won’t  be be able to set it down."
—Liz Fenton & Lisa Steinke, authors of The Two Lila Bennetts

"A heart-pounding thriller that will have you guessing until the very end! Gehrman's taut who-dunnit, The Girls Weekend, pulses with fear, suspicion, and the disturbing question of how well we really know each other. Not to be missed."
—Elle Marr, author of The Missing Sister