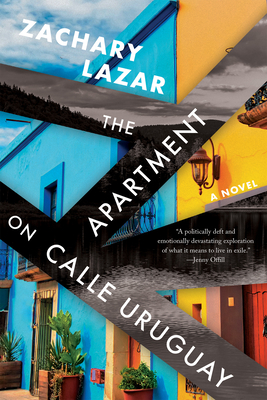 A haunting new novel by the author of Vengeance in which a chance encounter between a blocked painter and a journalist leads to a complicated romance that reveals their buried histories and vulnerabilities against the backdrops of an America in chaos and Mexico.

Beginning in the first summer of the post-Obama world, Zachary Lazar's bewitching and masterful new novel tells the story of Christopher Bell, a blocked painter on the East End of Long Island, and Ana Ramirez, a journalist who fled the crisis in Venezuela and is looking for work in New York. Bell has always felt marked by his foreignness, having emigrated to the U.S. as a child, and has come to believe that "words like 'identity' and 'American' are somehow very meaningful and very meaningless at the same time.” He has retreated to a modest house near a patch of woods, “a rural nowhere…that sometimes held more meaning for me in its silence than human language.”

In the woods, he encounters Ana, who is trying to “reinvent herself as the kind of person she’d been before” the world she knew disappeared.  A complicated romance develops that gradually reveals their buried histories—from the death of Bell’s former partner, Malika Jordan, a fellow artist, to the prison farm where he visits Malika’s incarcerated brother Jesse, to Mexico City, where Ana’s exiled family now lives. All of them have faced the same problem: how to build a new life once the idea you've had of "home" vanishes or becomes unrecognizable.

The Apartment on Calle Uruguay is a haunting exploration of love, art, and the cost of transformation. It lays out a fiercely intentional and introspective way of living in an unjust world.

Zachary Lazar is the author of five previous books, including the novel Sway, the memoir Evening's Empire: The Story of My Father's Murder, and the novel I Pity the Poor Immigrant, which was a New York Times Notable Book of 2014. His honors include a Guggenheim Fellowship, a Hodder Fellowship from Princeton University, and the 2015 John Updike Award from the American Academy of Arts and Letters for "a writer in mid-career whose work has  demonstrated consistent excellence." Lazar lives in New Orleans, where he is on the creative writing faculty at Tulane University.

“Christopher . . . engages seriously with the possibility that the meaning we hope to find in the often competing and sometimes discordant layers of facts and images surrounding us is, in the end, unlikely and random—the same quality that renders his story at once mysterious, frustrating, tragic and, yes, sublime.” —Dinaw Mengestu, The New York Times Book Review

“Engrossing . . . [A] fine paradox of a novel—a tale of renewal amid constant terror . . . Lazar’s delay in explaining the title proves canny, heightening the tension that percolates beneath his evasions and digressions. It makes for suspense at once ingenious and compelling, rooted in a sympathy that both illuminates terrifying recesses and extends its healing touch across a pair of troubled continents.” —John Domini, Los Angeles Times

"Subtle but piercingly political . . . No human relationship, Lazar’s novel proves to remind us, can seem to escape the shadows of our times." —David Winner, The Brooklyn Rail

“The Apartment on Calle Uruguay is an American story told through a distinctly Jewish lens—Lazar is able to deftly weave religion, politics, and history to create a vivid portrait of immigrants and exiles building, moving, and grieving home amidst the turbulent Trump presidency. By connecting his novel to the biblical Exodus and the Israelites wandering through the desert, Lazar is able to tap into a lineage of exile and tenuous belonging. This confusion over where home is, it’s the central engine to Lazar’s writing.” —Jonathan Dale, Electric Literature

"The book soars with timely truth . . . An engrossing statement of where we are, told through the eyes of a reluctant survivor." —Kirkus Reviews (starred review)

"Fascinating . . . Lazar perfectly orchestrates a symphony of frustration, empathy, fear, and hope into a thoughtful and timely tale." —Publishers Weekly

"A politically deft and emotionally devastating exploration of what it means to live in exile. With great lyricism and sly wit, Lazar illuminates the many varieties of longing for home." —Jenny Offill, author of Weather and Dept. of Speculation

"Zachary Lazar is a master of moments lesser writers gloss over. His characters are intensely human, intriguing, and inviting. Readers will relish the feeling that they are observing secret lives." —Maurice Carlos Ruffin, author of We Cast a Shadow

"The Apartment on Calle Uruguay is a meticulously written and evocative exploration of grief at the dawn of the Trump presidency." —Ladee Hubbard, author of The Rib King

"No one can write like Lazar, with his particular style of courage and ferocity. I inhaled in two sittings this sexy, mystical romance, which takes place just before the pandemic, as the world swerves toward disaster. Elegy, love story, reckoning, tale of hope and renewal: it is brilliant." —Deb Olin Unferth, author of Barn 8

"The Apartment on Calle Uruguay is an exquisite example of a master craftsman working in his prime. I greatly admire the rigor of Zachary Lazar's prose, and the elegance and ease of his storytelling." —Jami Attenberg, author of All This Could Be Yours and The Middlesteins

"Zachary Lazar has always written with uncommon intelligence and grace about both the delicate realizations and violent upheavals out of which we create ourselves––and The Apartment on Calle Uruguay strikes me as his timeliest novel to date. This book moved me." —John Wray, author of Godsend