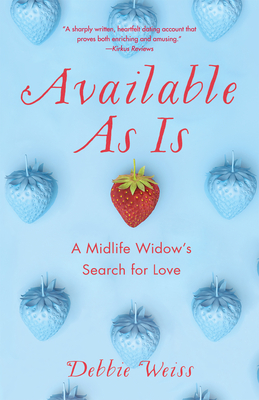 
On Our Shelves Now
After losing her husband, George--her one and only since high school prom--to cancer, fifty-year-old Debbie Weiss found herself opening a new chapter of life that she didn't know how to start. Initially, she binge-watched Netflix and drank Manhattans. Then she became a dating monster--starting with J-Date and then moving on to multiple other sites. Soon, Debbie was averaging two dates a day; in the blink of an eye, she'd gone from respectable widow to the girl you'd do in your Trans Am but wouldn't take to the prom. At one point, she was actually dating four guys at once, including a politician who refused to let Debbie meet his family because they'd met online. But as she juggled these many men, she began to feel that midlife dating was less an earnest romantic endeavor and more a battle of the sexes . . . and the line in the sand was how much women were willing to tolerate. Fed up, Debbie went offline. Only then, without the distraction of dating to keep her busy, did she finally, truly grieve her loss--and as she did, she also realized that she needed to forgive herself, both for George's death and for losing her identity in their marriage. Equal parts poignant and punchy, Available As Is is a darkly humorous account of seeking love--but finding yourself.