Fault Lines in the Constitution: The Framers, Their Fights, and the Flaws that Affect Us Today (Paperback) 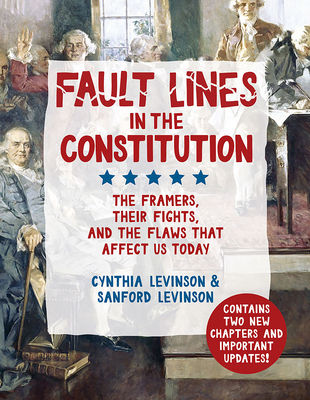 Fault Lines in the Constitution: The Framers, Their Fights, and the Flaws that Affect Us Today (Paperback)

By Cynthia Levinson, Sanford Levinson
List Price: $14.99
Our Price: $14.95
(Save: $0.04 0%)
On Our Shelves Now
A noted children's nonfiction author and one of the nation's foremost constitutional scholars team up to create an essential book on the United States Constitution for everyone grappling with today's most urgent political issues.

Many of the political issues we struggle with today have their roots in one place—the U.S. Constitution. Fault Lines in the Constitution takes readers back to the creation of this historic document and reveals how many of the problems that trouble us today—such as voting rights, the Electoral College, gerrymandering—were first introduced. Cynthia and Sanford Levinson explain the unexpected ramifications of decisions make in 1787 and explore possible solutions found in the constitutions of states and other countries.

Each chapter begins with a story―all but one of them true―that connects directly back to a section of the document that forms the basis of our society and government. Informative sidebars and graphics run throughout along with a timeline and bibliography.
A former teacher and educational policy consultant and researcher, Cynthia Levinson is the author of numerous award-winning nonfiction books about social justice for young readers,. She holds degrees from Wellesley College and Harvard University and also attended the Lyndon B. Johnson School of Public Affairs. She divides her time between Austin, Texas, and Boston, Massachusetts.

Sanford Levinson is an American legal scholar and a professor at the University of Texas Law School. He holds degrees from Duke, Stanford, and Harvard universities and is the author of several books for adults on the Constitution. He also writes frequently for a variety of newspapers, magazines, and blogs. He divides his time between Austin, Texas, and Boston, Massachusetts.
★ "Lately there's been dismay that civics, government, and history have taken a backseat in classrooms. This smartly conceived book goes a long way toward reintroducing students to those subjects. . . .the Levinsons link both history and current events as they offer an illustrative group of examples that show where the Constitution got it right—and wrong. . . . Although the font, charts, and well-written text make this appealing, it's not always an easy read. It is, however, an important one."—Booklist, Starred Review

★ "Interest-piquing anecdotes open each chapter, the effects of the Constitution's provisions are dramatically summarized in poster-like illustrations, and the ensuing discussions. . . are both cogent and highly readable. . . thought-provoking and exceptionally topical" —Publishers Weekly, Starred Review

★ "A fascinating, thoughtful, and provocative look at what in the Constitution keeps the United States from being 'a more perfect union.'" —Kirkus Reviews, Starred Review

★ "Insightful. . . Much food for thought on the application and relevance of many of the Constitution's stipulations. Essential for class discussions, debate teams, and reports." —School Library Journal, Starred Review