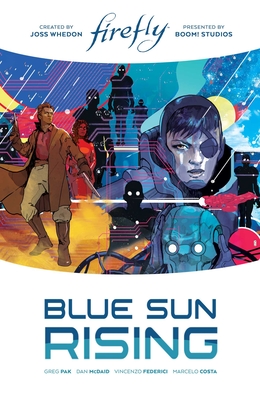 A special collector’s edition collection the thrilling first and final chapters of the first ever Firefly comic book event.

The first-ever Firefly event returns in a new edition concluding the opening and closing chapters that changed the ‘Verse! Sheriff Mal Reynolds has a new partner-a law enforcing robot from the Blue Sun corporation. If he wants to keep his job and protect his sector, he'll have to play by Blue Sun's rulebook. But the robots don't care about motives, about mercy, about anything other than enforcing the law-no matter the cost. The Blue Sun Corporation has helped to run the 'Verse from the shadows for years, but they're ready to step into the light...and if Mal aims to stop them, he'll have to put himself between his people, and a corporation that is ready to take over the 'Verse. There is only one thing to do: reunite the crew of the Serenity for one last impossible job.

Greg Pak is an American film director and comic book writer, known for his work on books published by Marvel Comics, including X-Treme X-Men and several titles featuring the Hulk and Hercules.[1] In 2019, Pak began writing Star Wars comics for Marvel.