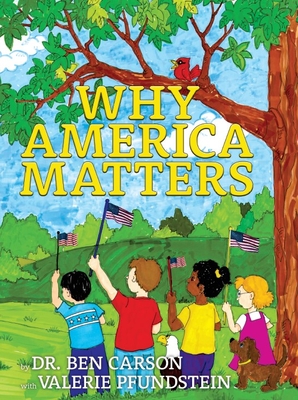 
Email or call for price.
Dr. Ben Carson is a famous doctor who has saved many people's lives-- including kids. He ran for President of the United States and served as a member of the President's Cabinet for four years, where he helped American families get housing. Dr. Carson and his wife, Candy Carson, are proud parents, grandparents, and Americans.Valerie Pfundstein has been a teacher, scout leader, mother, and a patriotic American who has written and published children's books, including Veterans: Heroes in Our Neighborhood, and now, with Dr. Ben Carson, Why America Matters.Illustrator: Liz Ball is the author/illustrator of more than thirty books, including her Hidden Treasures hidden picture puzzle book series. Her work is syndicated in newspapers. She is a mother, grandmother, and former Die Engineering instructor.