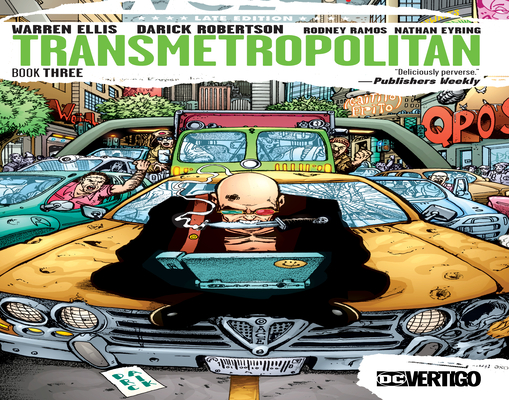 Life is not getting easier for Spider Jerusalem, as he is starting to have blackouts and episodes of mental confusion not related to his usual diet of narcotics and whiskey! Can investigative reporter Spider Jerusalem still fight the injustices of the 21st-century Babylon...or has the corrupted city taken one more soul?

Having had enough of the warped 21st-century Babylon that he lives in, Spider escapes into a world of bitterness and pills. As he stumbles through this haze of depression and drugs, he must find a way to cover the biggest story of the year, the presidential election. Armed with only his demented mind and dark sense of humor, Spider embarks on an adventure of political cynicism, horrific sex, and unwelcome celebrity that culminates in a shocking and ruinous ending.

Warren Ellis is the award-winning writer of Transmetropolitan, Planetary, The Authority, and the writer and co-creator of the graphic novel RED, which was the basis of two major motion pictures.   He is also the author of the NYT-bestselling novels Gun Machine and Crooked Little Vein.  His newest publication is the digital short-story single Dead Pig Collector, from FSG Originals.

His awards and recognitions include the NUIG Literary and Debating Society’s President’s Medal for service to freedom of speech, the Eagle Awards Roll Of Honour for lifetime achievement in the field of comics & graphic novels, the Grand Prix de l’Imaginaire 2010, the Sidewise Award for Alternate History, and the International Horror Guild Award for illustrated narrative.

Ellis lives outside London, on the south-east coast of England, in case he needs to make a quick getaway.

Darick Robertson is a veteran comic artist who has worked at DC Comics and Marvel for nearly twenty years. He broke into the mainstream drawing Justice League for DC and went on to work for Marvel where he penciled titles including Wolverine, Spider-Man, and most notably the New Warriors. Robertson is best known as the artist / co-creator of the Eisner Award-winning series Transmetropolitan with writer Warren Ellis, which was hailed by Wired magazine as "The Graphic Novel of the Decade." He is currently working on an edgy new monthly series entitled The Boys for WildStorm with writer Garth Ennis.