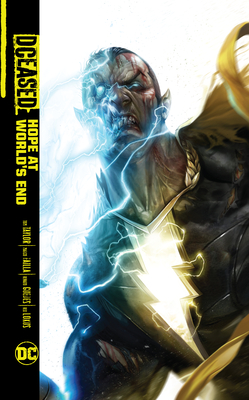 In Earth's darkest hour, heroes will bring hope in this new addition to the DCeased saga, taking place within the timeline of the original epic!

DCeased became a smash horror hit in 2019 by offering a twisted version of the DC Universe infected by the Anti-Life Equation, transforming heroes and villains alike into mindless monsters.

In DCeased: Hope At World's End, the Anti-Life Equation has infected over a billion people on Earth. Heroes and villains have fallen. In the immediate aftermath of the destruction of Metropolis, Superman and Wonder Woman spearhead an effort to stem the tide of infection, preserve and protect survivors, and plan for what's next. In the Earth's darkest hour, heroes will bring hope! The war for Earth has only just begun!

Tom Taylor is the creator of the Aurealis Award-winning graphic novel series The Deep (which tells the adventures of a multiethnic family of underwater explorers who live on a submarine). The Deep has been optioned by Technicolor to be turned into a 26-episode CG animated series. He is perhaps best known for the bestselling DC Comics series Injustice: Gods Among Us, Earth 2, Batman/Superman, and his many Star Wars series. Taylor has written for DC Comics, Dark Horse Comics, IDW Publishing, WildStorm, 2000 AD, and Gestalt Comics.