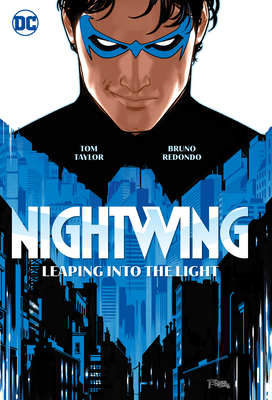 
Nightwing is back—and his drive to keep Blüdhaven safe has never been stronger! But his adoptive city has elected a new mayor with the last name Zucco. When Nightwing enlists Batgirl’s help in investigating the politician bearing the same name as the man who murdered his parents, she unearths details that will shock and fundamentally change the hero.

Dick Grayson’s big heart has protected those persecuted by bullies in his youth, combated evil alongside Batman as Robin, and pledged his newly inherited wealth to enriching Blüdhaven as Nightwing. His kindness and generosity have always guided his life.  But now a new villain stalks the back alleys, removing the hearts of the city’s most vulnerable.  Who is this terrifying new menace named Heartless, and will he be able to resist plucking out the biggest heart in all of Blüdhaven?

Collected in this Infinite Frontier Nightwing evolution are issues #78-83.

Tom Taylor is the creator of the Aurealis Award-Winning graphic novel series The Deep (which tells the adventures of a multi-ethnic family of underwater explorers who live on a submarine). The Deep has been optioned by Technicolor to be turned into a 26-episode CG animated series. He is perhaps best known for the best-selling DC Comics series Injustice: Gods Among us, Earth 2, Batman/Superman, and his many Star Wars series. Taylor has written for DC Comics, Dark Horse Comics, IDW Publishing, Wildstorm, 2000 AD and Gestalt Comics.