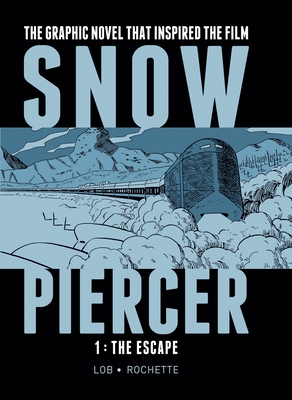 This is book number 1 in the Snowpiercer series.

Snowpiercer is the enthralling and thought-provoking post-apocalyptic graphic novel that inspired the critically acclaimed movie starring Chris Evans (Captain America, Fantastic Four). Originally published in French, this marks the first time that Snowpiercer will be available in English.

In a harsh, uncompromisingly cold future where Earth has succumbed to treacherously low temperatures, the last remaining members of humanity travel on a train while the outside world remains encased in ice.

The surviving community are not without a social hierarchy; those that travel at the front of the train live in relative luxury whilst those unfortunate enough to be at the rear remain clustered like cattle in claustrophobic darkness. Yet, things are about to change aboard the train as passengers become disgruntled...

Benjamin Legrand is the author of numerous thriller novels, screenplays, and comic scripts. As well as his own original works, he is well known as the French translator for the works of such authors as Tom Wolfe, Paul Cleave and Nelson DeMille. After Jacques Lob's death in 1990, Legrand continued the Snowpiercer series with a two-part sequel, collected by Titan in a single second volume.

Jacques Lob, winner of the Grand Prix de la ville d'Angoulême award, was a Franco-Belgian comic book author, best known for his Superdupont series. He began his career as an editorial cartoonist, before an editor suggested he focused on his writing, which bore rich fruit across a number of genres. He passed away in 1990.

Jean-Marc Rochette is a painter, illustrator and cartoonist. He has worked across a variety of projects and genres, from science fiction comics to children's cartoons - including adaptations of Voltaire's Candide and Homer's Odyssey - but Snowpiercer remains the work by which he is most popularly known.

"It's a great science fiction read that will keep you thinking for days." - Examiner

"I'm a sucker for post-apocalyptic stories, so this one's right up my alley." - Quint's SUMMER GEEK GUIDE (Aint It Cool News)

"One of the most celebrated sociopolitical tales in comics." - IGN

"Snowpiercer is a great read and a great looking release. If nothing else it’ll look super classy sitting on your bookshelf" - Nerdophiles

"Rises above the clichés" - Miami Herald

"I was enthralled." - Geek Twins

"Paired with an incredibly skilled artist, this first installment, in what will be a trilogy of graphic novels, is one that should not be passed up." - Another Castle

"Stunning black and white art, full of shades of grey, makes fantastic use of the setting." - Giant Freakin

"Snowpiercer was worth the wait." - Basement Rejects

"A triumph of the medium." - Silver Emulsion

"The artwork in the book is once again first rate." - Geek Hard

"After more than 30 years, it’s about time this thought-provoking story got an English language release." - Nerdcore Movement

"From its commentary on inequality, to the mysterious and intriguing characters, to the dystopian future it presents, Snowpiercer hits high marks across the board.  Part noir, part gritty science fiction, this series takes a unique perspective on the end of the world." - Destroy The Cyborg

"From an artistic standpoint, the book is marvelous." - Comic Attack

"It’s cerebral, it’s entertaining, and it’s brutally honest, making it a powerful and damning message about our modern society when all hope is lost." - Leviathyn

"Hard To Put Down." - Destroy the Brain

"Rochette’s work is evocative of American classics of the eighties, such as Dave Gibbons’ work on Watchmen, David Lloyd’s work on V for Vendetta, and Frank Miller’s work on Sin City...Snowpiercer is a page turner that comic and science fiction fans alike will find to be an engrossing read." - SF Signal

"An extremely fantastic and timeless read." - Galactic News One

"Snowpiercer would be a welcome addition to any comic collection." - Comic Hype

"A good apocalyptic read and a well-executed translation." - Knowshi

"The story is solid, tightly paced, with layers that grow more nuanced and complex  as you read deeper through to the end. Like the never-ending, seemingly futile journey of the train itself, the plot comes at you like a steamroller." - Girls Like Comics

"An unusually clever and simple tragedy of class warfare and the arrogance and resilience of humanity that manages to be relevant and fresh 30 years after its original publication." - Fanboy Comics

"Not the kind of book you want to miss out on. Jaqcues Lob and Jean-Marc Rochette craft a claustrophobic tale of social structures, violence, and sex, all in stunning detail." - IGN

"A science fiction tale that certainly stands the test of time." - Film Pulse

"Those of you who might want to skip these enthralling and thought provoking pages for the silver screen adaptation would be missing out on a remarkable read." - Forces of Geek

"An engaging and clever take on the usual tropes of the apocalypse/survivalist genre." - The Playlist

"Snowpiercer is unlike anything I’ve read. The premise alone is enough to attract readers and the themes and issues are still relevant. It’s a great, compelling look at humanity and its treatment of class difference." - Major Spoilers

"Titan went out on a limb to bring this great story to life for English readers." - Nerd Gasms

"Titan's volume is their usual gorgeous book, and it's well worth buying." - Uproxx

"It may have taken a decade for this creative French comic to get some of the spotlight, but great comics like this are often timeless." - Examiner

"An outstanding human tale about the struggles of class in a very unfortunate situation." - We The Nerdy

"This collection is presented in a beautiful hardcover edition which presents Jean-Marc Rochette’s clean, propulsive art to its best advantage." -  Project Fandom

"An entertaining action thriller that’s much deeper than you’d expect. I absolutely recommend checking it out." - Graphic Policy

"Titan gives this first volume of “Snowpiercer” the respect it deserves. The translation is solid and the hardcover printing is beautiful. It’s been a long time coming, but it’s well worth the wait." - Bloody Disgusting

"Fantastic writing and gritty art, and though it debuted in 1982, it still feels fresh some 30 years later." - The Verge

"Essential reading for any fans of the sequential arts...and a book I can’t recommend highly enough. 5/5" - Big Comic Page

"If you’re into cool stories about futures that suck, this one is worth your time." - Geek Hard

"One of the best science fiction stories I’ve read in the comic/graphic novel medium." - Nerds Unchained

"Left me breathless...Jean-Marc Rochette’s illustrations are flawless. 5/5" - Den of Geek

"Dystopian scifi at its best...a marvellous entry into the genre, and one of Europe's finest comics works." - io9

"A tightly presented, compelling story that considers the plight of one man caught inside a class struggle that has implications for the very survival of the human race.  And don’t get me wrong, it may be a dark tale, but it is a well-crafted and exciting one.  I’ll be the first one to buy a boarding pass when they release Snowpiercer Volume 2: Explorers." - Pop Mythology

"Packed with great storytelling (written and artistically), it is great to have this story finally translated into English. Moreover, this is a story that thirty years on, is still just as engaging and compelling as it was way back in 1984." - The MacGuffin

"Pretty much the definition of a page-turner, this comic book has not aged at all, and deserves to be on the shelf of any comic book fan. I honestly can’t say how impressed I am that Titan has managed to finally get this volume translated." - Population Go

"This is a thrilling post-apocalyptic tale that draws you in and never lets go. We highly recommend "SNOWPIERCER"!" - TM Stash

"Nothing short of awesome." - Horror Movies

"Lob’s tale is both frightening and very real...Rochette’s illustrations are equally as enthralling and superbly capture the essence of the script itself. While the book predominantly paints a dark picture, it does offer rare moments that masterfully encapsulate emotions such as joy, pain and anger, something that speaks volumes to the work’s ability to captivate." - The Nerd Machine

"Similar in tone and setting to Alan Moore's V for Vendetta." - Super Punch

"It’s easy to lose yourself in Snowpiercer because the world feels real." - Hyper Geeky

"Like WALKING DEAD, this is apocalypse
done right!" - Ain't It Cool

"One of the greatest sci-fi comics ever written!"
- Comics Beat

"An absolutely fascinating read from cover to cover, "Snowpiercer: The Escape" is one of those dystopian science fiction stories that is all too plausible given today's political polarization, increasingly rapid climate change, and humanities undeniable contribution to the increasing extinction rates of flora and fauna species globally. " -Midwest Book Review