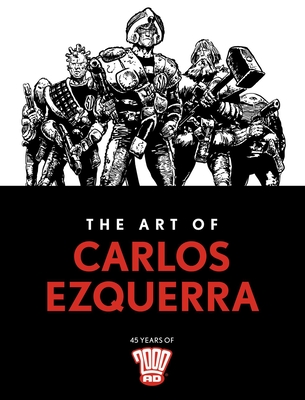 Carlos Ezquerra's amazing work is collected in this oversized hardcover book, showing off his impressive art that has entranced readers for over 50 years.

An often unsung titan of the industry, Carlos Ezquerra's influence has been as broad as his artwork was inimitable. His co-creation of Judge Dredd and powerful work on Strontium Dog alone helped establish 2000 AD as a powerhouse and him as a comics master. When he passed away unexpectedly in 2018, comics was robbed of one of its most vibrant, dynamic and powerful talents, yet his legacy is almost unparalleled in the industry. Publishing as part of 2000 AD's 45th anniversary celebrations, this 240-page hardcover collection spans half a century of his comic work and is ideal for both long-time fans and those looking to discover his work for themselves. Beginning with samples from his early art on romance titles as Valentine and Mirabelle, this book also collects never-before-reprinted short war comics from the groundbreaking 1970s war comic, Battle. It also showcases his sumptuous colour work on Strontium Dog, and culminates with selection of his 2000 AD work and his greatest creation, Judge Dredd.

Carlos Ezquerra was the co-creator of Judge Dredd, Strontium Dog, Rat Pack, Major Eazy and many other fan favourite characters, he designed the classic original Dredd costume as well as visually conceptualising Mega-City One. In addition to these credits he also illustrated A.B.C. Warriors, Judge Anderson, Tharg the Mighty, and Cursed Earth Koburn amongst many other stories. Outside of the ‘Galaxy’s Greatest Comic’, Ezquerra illustrated the first Third World War episodes in Crisis magazine, and become a regular collaborator with Garth Ennis, working on Adventures in the Rifle Brigade, Bloody Mary, Just a Pilgrim, Condors, The Magnificent Kevin and two special Preacher episodes. He died in 2018 but his profound influence on the world of comic art cannot be overstated.