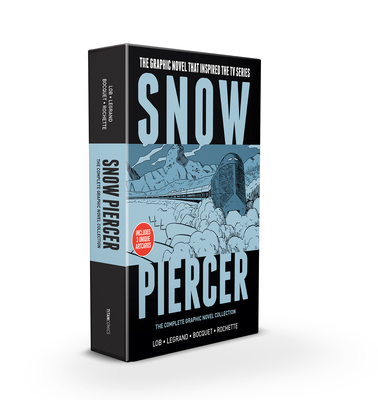 On a future, frozen Earth, a train that never stops circumnavigates the globe. On board: all of humanity that we could save from the great disaster that wrapped the planet in ice. At the front of the train, the survivors live in comfort and luxury - at the rear, their lives are worse than cattle, trapped in the squalid dark. When one of the occupants of the tail breaks through into the main train - all hell follows in his wake!

Jacques Lob, winner of the Grand Prix de la ville d'Angoulême award, was Franco-Belgian comic book author, best known for his Superdupont series. He began his career as an editorial cartoonist, before an editor suggested he focused on his writing, which bore rich fruit across a number of genres. He passed away in 1990.

Benjamin Legrand is the author of numerous thriller novels, screenplays, and comic scripts. As well as his own original works, he is well-known as the French translator of the works of such authors as Tom Wolfe, Paul Cleave and Nelson DeMille. After Jacques Lob's death in 1990, Legrand continued the Snowpiercer series with a two-part sequel, collected by Titan in a single second volume.

Olivier Bocquet is a writer, director and translator who has written and directed short films, movies and television. He has written comics for the most prestigious of French Comics publishers, such as Casterman, Dargaud and Dupuis.

Jean-Marc Rochette is a painter, illustrator and cartoonist. He has worked across a variety of projects and genres, from science fiction comics to children's cartoons - and including adaptations of Voltaire's Candide and Homer's Odyssey - but Snowpiercer remains the work by which he is most popularly known.