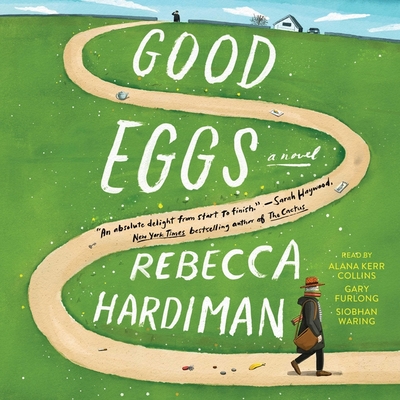 “Filled with warmth and hilarity, this book reads like a mix of The Unlikely Pilgrimage of Harold Frye and a Maeve Binchy novel. The Irish setting is especially welcome on this side of the pond, and of the three plotlines following different generations, the absolute best paints 83-year-old pistol of a grandma Millie as a delightfully quirky and determined soul. A charming, offbeat novel — perfect to savor as we emerge from this particular winter.”
— Deb Wayman, Fair Isle Books, Washington Island, WI

"A joyous, exuberantly fun-filled novel of second chances. An absolute delight from start to finish " --Sarah Haywood, New York Times bestselling author "Bracing, hilarious, warm, this novel is as wayward and mad as the human heart." --Judy Blundell, New York Times bestselling author A hilarious and heartfelt debut novel following three generations of a boisterous Irish family whose simmering tensions boil over when an American home aide enters the picture, becoming the calamitous force that will either undo or remake this family--perfect for fans of Where'd You Go, Bernadette and Evvie Drake Starts Over.When Kevin Gogarty's irrepressible eighty-three-year-old mother, Millie, is caught shoplifting yet again, he has no choice but to hire a caretaker to keep an eye on her. Kevin, recently unemployed, is already at his wits' end tending to a full house while his wife travels to exotic locales for work, leaving him solo with his sulky, misbehaved teenaged daughter, Aideen, whose troubles escalate when she befriends the campus rebel at her new boarding school. Into the Gogarty fray steps Sylvia, Millie's upbeat American home aide, who appears at first to be their saving grace--until she catapults the Gogarty clan into their greatest crisis yet. With charm, humor, and pathos to spare, Good Eggs is a delightful study in self-determination; the notion that it's never too late to start living; and the unique redemption that family, despite its maddening flaws, can offer.