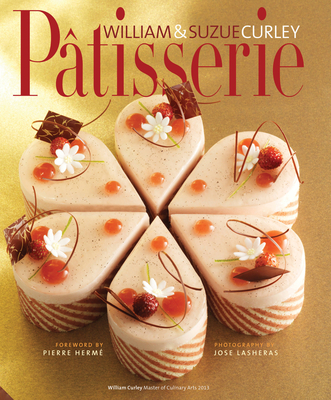 By William Curley, Suzue Curley
$60.50
Email or call for price.

'A profoundly pleasurable book which offers that rare combination of daring, accomplished technique illuminated with extraordinary simplicity and clarity. His latest must-have book will inspire and delight.' Michel and Alain Roux

Patisserie reflects award-winning chocolatier, William Curley's passion for taking classic recipes and modernizing them with his own innovations.

Creating top-quality patisserie is often seen as something only a trained professional can do, however with patisserie equipment now easily accessible to all, it's easy to start making perfect patisserie at home. Patisserie processes are broken down into a step-by-step guide complete with expert knowledge to produce flawless creations every time, and a series of basic recipes – covering sponges, creams and custards, pastry and syrups – provide a solid foundation in patisserie techniques as well as inspiration for aspiring creative pastry chefs.

​Packed full of mouthwatering delicious recipes, including classics such as Rhum Baba and Tarte Alsacienne that are given a modern adaptation, this gorgeous bake book will awaken and inspire the pastry chef in you!

Brought up in Fife, William Curley's career began with an apprenticeship at Gleneagles, followed by 6 years at numerous Michelin-starred establishments, working with respected chefs including Pierre Koffman at La Tante Claire, Raymond Blanc at Le Manoir aux Quata Saisons and Marco Pierre White at The Restaurant. He then became Chef Patissier at The Savoy Hotel under Anton Edelman, as Chief Patissier leading a team of 21 pastry chefs. In 2004, he opened his first boutique in Richmond, followed by the opening of his equally successful Belgravia Boutique. After an increasing demand for his chocolate and patisserie creations, William Curley chocolate and patisserie concessions were opened in world-renowned department store Harrods in July 2011. They also create bespoke patisserie to accompany Afternoon Teas at some of London's top establishments. William has been awarded Britain's Best Chocolatier by the Academy of Chocolate four times (2007-2011) and has won numerous other awards. Most recently William became a member of the prestigious Relais Desserts, an association of the top pastry chefs across the world who come together to promote haute patisserie. Couture Chocolate, William's first book, won the Guild of Food Writers Cookery Book of the Year award in 2012.

Suzue Curley completes the team with an equally impressive patisserie background. Born in Japan, Suzue was influenced and inspired by many Japanese patissiers but recognized that she needed to move to Europe to complete her training. She met William while working as a patissier at The Savoy, having previously trained at Claridge's and Le Cordon Bleu.

'If you’re looking to really wow guests with dessert, this is the book for you’

'If you’re looking to really wow guests with dessert, this is the book for you’

‘these desserts are exquisite, complex and delicious. But having been to a class with them I can vouch that the patisserie is perfectly do-able; it just needs time and patience’