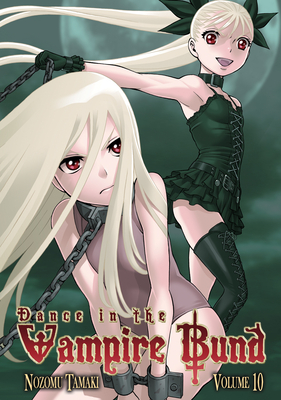 
Email or call for price.
The New York Times Bestselling series, now a hit anime from FUNimation! The queen of vampires, Mina Tepes, has been replaced by an imposter, and only Yuki, now a mute, knows the truth. While the subjects of the Vampire Bund are unaware that an evil doppleganger rules over them, Mina's most trusted friends remain sequestered on the sidelines. It's up to Yuki to risk her life to convince Mina's werewolf bodyguard Akira that the time has come to fight back. Dance in the Vampire Bund is an ongoing manga series that features stunning artwork and an enthrallingly original supernatural narrative. The manga has been adapted into a hit anime series in Japan and licensed by FUNimation for North America. Volumes 7-9 of Dance in the Vampire Bund have hit the New York Times Manga Bestsellers List several times!
NOZOMU TAMAKI, the New York Times bestselling creator of Dance in the Vampire Bund, lives in Tokyo, Japan.

“A wicked addition to the vampire action gang” —VAMPYRES ONLY